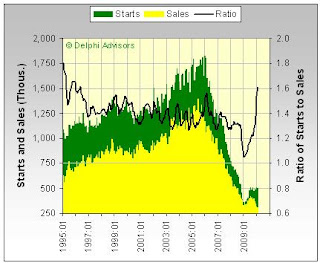 The graph at left shows starts and sales of single-family housing in the United States, as well as a three-month moving average in the ratio of starts to sales. Between early 2006 and (especially) the latter months of 2008, starts and sales meandered toward convergence (i.e., a starts/sales ratio of 1.0). Since the beginning of 2009 (particularly the second half of the year), though, the two metrics have diverged once again; starts have been trending higher while sales have slumped.
Does this portend another die-back in housing starts? Find out our opinion in the upcoming April issue of Economic Outlook, available from Forest2Market.
Posted by DocH at 8:24 PM