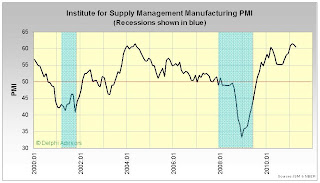 Click image for larger version
The pace of growth in manufacturing slowed again in April, with the Institute for Supply Management’s (ISM) PMI falling to 60.4, a drop of 0.8 percentage point. "The recent trend of rapid growth in the manufacturing sector continued in April as the PMI registered above 60 percent for the fourth consecutive month,” said Norbert Ore, chair of ISM’s Manufacturing Business Survey Committee. "The New Orders and Production Indexes continue to drive the PMI, as they have both exceeded 60 percent for five consecutive months. Manufacturing employment appears to have developed significant momentum, as the Employment Index readings for the first four months of 2011 are the highest readings in the last 38 years. Inventory growth also took place in April after two months of destocking; however, the inventory restocking would appear to be necessitated by the strong performance in new orders. While the manufacturing sector is definitely performing above most expectations so far in 2011, manufacturers are experiencing significant cost pressures from commodities and other inputs." 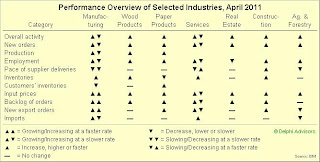 The rate of input price changes diverged between the manufacturing and service sectors once again. The index of prices paid by manufacturers rose by 0.5 percentage point (i.e., prices rose at a faster pace in April), and now stands at its highest level since July 2008. At the same time, however, non-manufacturers saw a 2.0 percentage point decline (i.e., prices rose more slowly) in their index. The lists of commodities up in price were quite lengthy, and included fuel of all kinds and paper. No commodity was down in price, neither was any relevant commodity described as in short supply.
Posted by DocH at 12:06 PM