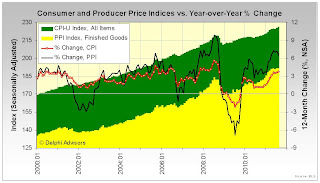 The seasonally adjusted increase in the all-items index was broad-based, with continuing increases in the indexes for gasoline, food, shelter, and apparel. The gasoline index rose for the 12th time in the last 14 months and led to a 1.2 percent increase in the energy index, while the food index rose 0.5 percent, its largest increase since March.

The seasonally adjusted Producer Price Index for Finished Goods (PPI) was unchanged in August. Finished goods prices advanced 0.2 percent in July and declined 0.4 percent in June. At the earlier stages of processing, prices received by manufacturers of intermediate goods decreased 0.5 percent in August, and the crude goods index moved up 0.2 percent. On an unadjusted basis, prices for finished goods increased 6.5 percent for the 12 months ended August 2011, the smallest year-over-year advance since a 5.6 percent rise in March 2011. 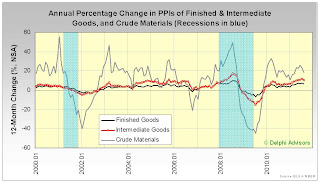 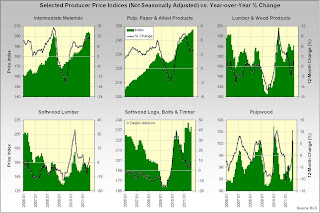 Click image for larger version
All of the price index changes for the forest products that we track rose more quickly on a year-over-year basis. Pulpwood and softwood logs, bolts & timber exhibited the most noteworthy year-over-year increases, with 10.4 and 9.5 percent changes, respectively. Pulpwood also had the largest monthly price rise (10.5 percent). 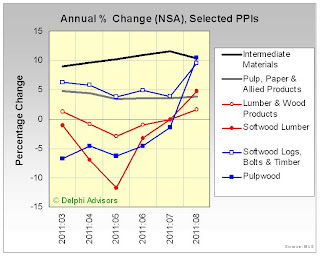 Click image for larger version
Posted by DocH at 11:44 AM