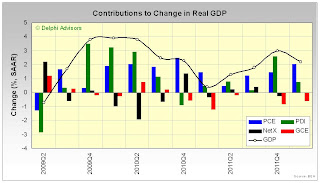 The Bureau of Economic Analysis (BEA) estimated 1Q2012 growth in real U.S. gross domestic product (GDP) at a seasonally adjusted and annualized rate of 2.2 percent, down noticeably from the 4Q2011 rate of 3.0 percent. Personal consumption expenditures (PCE) and, to a lesser extent, private domestic investment (PDI) contributed to 3Q growth in that order; net exports (NetX) were essentially a “wash” while government consumption expenditures (GCE) exerted a “drag.” 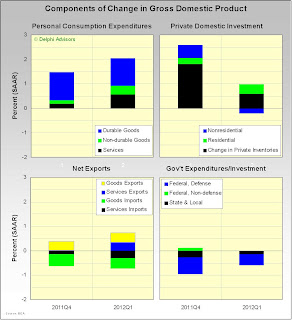 As lackluster as it may be, the headline number of 2.20 percent is still likely overstating the health of the economy:

-- The deflator used in constructing the reported growth rate (reflecting annualized inflation of 1.54 percent) will seem patently absurd to anyone who lived in the real world during the first quarter of 2012, especially if they bought gasoline or groceries. Using the CPI-U as a deflator makes the headline growth almost completely vanish.

-- Even the BEA's optimistic "deflators" couldn't keep the per capita disposable income from shrinking during the quarter.

-- Governments continued to shrink their spending, and they sucked -0.60 percent from the headline number. That trend is unlikely to reverse anytime soon.

-- Real final sales and factory production continued to be supported by inventory building -- which is unsustainable and must ultimately reverse (even if the cost of carrying the inventories has been kept artificially low by the Fed).

Our bottom line for the economy has always been the health of households. This report shows per capita disposable income is shrinking and that any improvements in consumer spending are likely unsustainable. We suspect that the softening seen in this report the harbinger of a collapsing "recovery" that will continue to unfold during 2012.
Posted by DocH at 9:45 AM