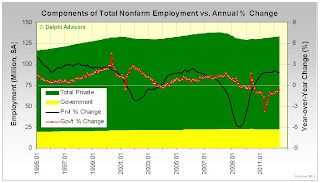 According to the Bureau of Labor Statistics (BLS) non-farm payroll employment rose by 69,000 in May, and the unemployment rate ticked back up to 8.2 percent. Employment increased in health care, transportation and warehousing, and wholesale trade but declined in construction. Employment was little changed in most other major industries. Government employment shrank by 13,000. The change in total non-farm payroll employment for March was revised from +154,000 to +143,000, and the change for April was revised from +115,000 to +77,000. 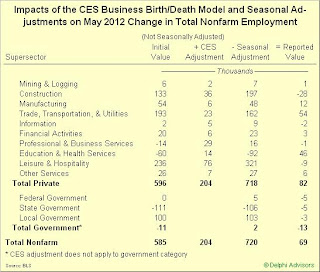 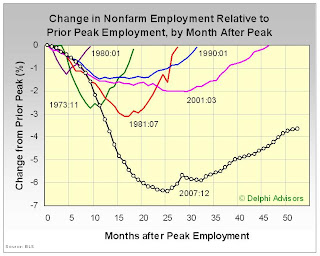 As we have been pointing out for quite some time, employment is converging with the previous peak at a slower pace than any prior recession going back to 1973. The economy still has 5.01 million fewer jobs than at the January 2008 peak. 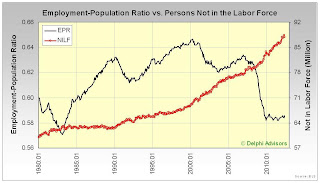 The number of people not in the labor force fell by 461,000 in May, recouping much of the 522,000 rise in April. The ratio of employed persons to the entire population continued moving sideways. 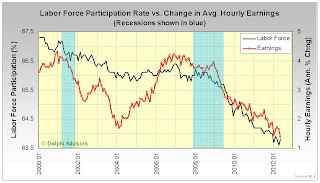 The civilian labor force participation rate (the share of the population 16 years and older working or seeking work) ticked up by 0.2 percentage point in May (April’s 63.6 percent was the lowest rate since May 1983); that increase did not reverse the downward trend in place since January 2007, however. At the same time, the annual percentage increase in average hourly earnings of production and non-supervisory employees dropped to 1.39 percent. With the price index for urban consumers rising at a 2.3 percent annual pace, wages are falling in real terms (i.e., wage increases are not keeping up with price inflation). 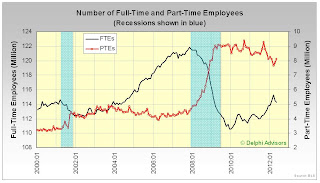 Taken at face value, this employment report is abysmal.
Posted by DocH at 10:37 PM