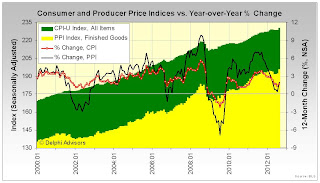 The seasonally adjusted Consumer Price Index increased 0.6 percent in August. Over the last 12 months, the all items index increased 1.7 percent before seasonal adjustment.

The seasonally adjusted increase in the all items index was the largest since June 2009. About 80 percent of the increase was accounted for by the gasoline index, which rose 9.0 percent and was the major factor in the energy index rising sharply in August after declining in each of the four previous months.

The seasonally adjusted Producer Price Index for finished goods (PPI) rose 1.7 percent in August. This increase followed advances of 0.3 percent in July and 0.1 percent in June, and marks the largest monthly rise since a 1.9 percent increase in June 2009. At the earlier stages of processing, prices received by manufacturers of intermediate goods moved up 1.1 percent in August, and the crude goods index rose 5.8 percent. On an unadjusted basis, prices for finished goods climbed 2.0 percent for the 12 months ended August 2012, the largest advance since a 2.8 percent increase for the 12 months ended March 2012. 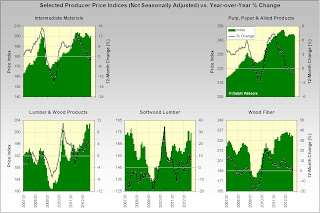 Prices of intermediate materials; pulp, paper & allied products; and wood fiber are lower than they were a year earlier, while the other categories are higher.

Click image for larger version
Posted by DocH at 2:41 PM