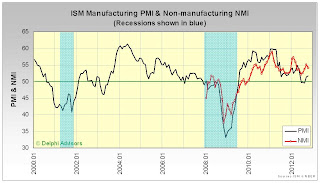 Manufacturing expanded at a slightly faster rate in October, with the Institute for Supply Management’s (ISM) PMI edging up to 51.7 percent -- from 51.5 percent in September (50 percent is the breakpoint between contraction and expansion). After reciting some report details, Bradley Holcomb, chair of ISM’s Manufacturing Business Survey Committee, concluded with, "Comments from the [respondent] panel this month reflect continued concern over a fragile global economy and soft orders across several manufacturing sectors." The sub-indices were mixed: The number of respondents reporting increased new orders was partially to completely offset by the combination of decreased import and export orders, and shrinking order backlogs. Although production expanded, growth in the employment index slowed. 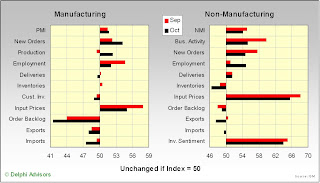 The service sector grew at a slower clip in October, reflected by a 0.9 percentage point drop (to 54.2 percent) in the non-manufacturing index (now known simply as the “NMI”). Comments by Anthony Nieves, chair of ISM’s Non-manufacturing Business Survey Committee, had much the same tenor as Holcomb’s. “The majority of the respondents' comments reflect a positive but guarded outlook on business conditions and the economy,” said Nieves. Not only did fewer respondents report growth in new orders, but order backlogs and import/export orders also contracted. The most encouraging aspects of the non-manufacturing report involved expanding employment and lessened input-price pressure. 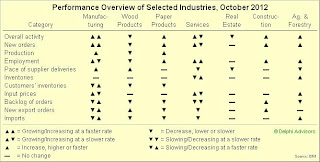 Prices increased for a variety of commodities, including corrugated products, linerboard, pallets, paper and caustic soda. Lumber was down in price. Some respondents reported gasoline and diesel as higher in price, and some as down in price. No relevant commodities were in short supply.


The foregoing comments represent the general economic views and analysis of Delphi Advisors, and are provided solely for the purpose of information, instruction and discourse. They do not constitute a solicitation or recommendation regarding any investment.
Posted by DocH at 2:19 PM