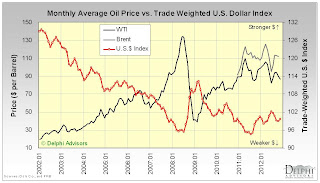 The monthly average U.S.-dollar price of West Texas Intermediate (WTI) crude oil extended its downturn in November, retreating by $2.91 (-3.2 percent) to $86.66 per barrel. That drop was concurrent with a slight strengthening of the dollar and the lagged impacts of a slump in consumption of over 1 million barrels per day (BPD) -- to 18.2 million BPD -- during September, but occurred despite a topping out of crude stocks.

The price spread between Brent crude (the predominant grade used in Europe) and WTI shrank in October (November Brent data was not yet available when this was written), to $22.14 per barrel; that differential was the widest in over a year. Brent and WTI prices had been essentially identical until the end of 2010. 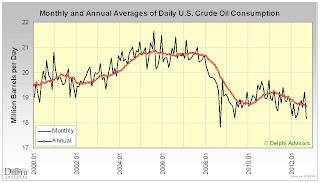 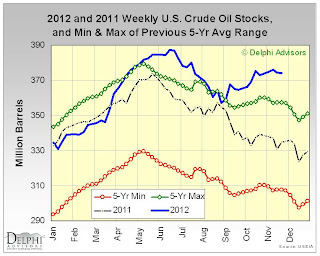 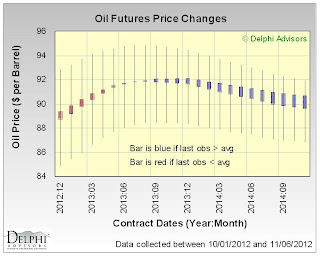 Is the United States set to overtake Saudi Arabia in oil output?

That is what the International Energy Agency (IEA) predicted in its mid-November World Energy Outlook. The global energy map "is being redrawn by the resurgence in oil and gas production in the United States," IEA said, and could mean U.S. production might outstrip that of Saudi Arabia. "By around 2020, the United States is projected to become the largest global oil producer" and overtake Saudi Arabia for a time, the agency said. "The result is a continued fall in U.S. oil imports (currently at 20 percent of its needs) to the extent that North America becomes a net oil exporter around 2030."

Although the emergence of shale oil and gas may be a game changer in global energy, increased competition for water resources needed for energy projects is a risk factor that may prevent the IEA’s forecast from coming to pass. Shale oil and gas are extracted by pumping water, sand and chemicals into the ground at high pressure to crack rocks open, a process known as hydraulic fracturing, or "fracking." But the intensive use of water, "will increasingly impose additional costs," and could "threaten the viability of projects" for shale oil and gas, and also biofuels, the agency said.

Within the next three to five years, more than 200 coal-fired power generating units will be shut down across 25 states; the closures are due primarily to increasing restrictions imposed by U.S. Environmental Protection Agency regulations. While those U.S. plants are closing, a report by the World Resources Institute{http://pdf.wri.org/global_coal_risk_assessment.pdf} reveals nearly 1,200 new coal-fired power plants may be opening elsewhere around the world -- primarily in India and China. It seems apparent that any perceived environmental benefits derived from shuttering U.S. plants will be completely inundated by the capacity coming online overseas. It is also entirely possible U.S. coal will be exported to countries that still encourage its consumption instead of being used for domestic power production. Because there is no alternative energy source (e.g., biomass) ready to step into the void, adverse effects will include higher unemployment in not only the coal-dependent sectors but across the entire economy as higher utility bills cause both consumers and industries to curb activity.


The foregoing comments represent the general economic views and analysis of Delphi Advisors, and are provided solely for the purpose of information, instruction and discourse. They do not constitute a solicitation or recommendation regarding any investment.
Posted by DocH at 11:34 AM