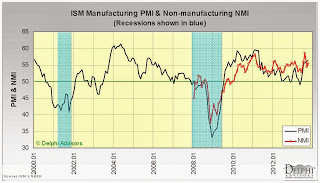 Click image for larger version
More manufacturing businesses surveyed by the Institute for Supply Management (ISM) indicated their activity expanded in October than any month since April 2011. The rose to 56.4 percent, an increase of 0.2 percentage point from September's reading of 56.2 percent (50 percent is the breakpoint between contraction and expansion); expectations had been for a drop to 55.0 percent. “The panel's comments are generally positive about the current business climate,” said Bradley Holcomb, chair of ISM’s Manufacturing Business Survey Committee. “However, there are mixed responses on whether the government shutdown and potential default have had any effect on October's results.” 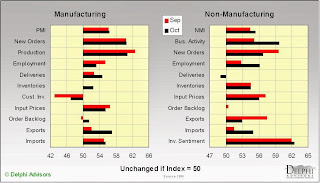 Click image for larger version
Most general manufacturing sub-indices were more positive than in September; the most notable exceptions were production and employment. Both Wood and Paper Products reported overall expansion. Supporting evidence was rather sparse (just employment and new export orders) in the case of Wood Products, however. For Paper Products, much of the higher current activity could result in slower future expansion, especially when coupled with observations that growth in new domestic and export orders slowed in October.
The service sector recouped some of September’s dramatic slowdown in growth, although most of the extra business activity apparently originated in employment and imports. The non-manufacturing index (now known simply as the “NMI”) registered 55.4 percent, 1.0 percentage point higher than September’s 54.4 percent; this increase bucked expectations of a drop to 54.0 percent. “Respondents' comments are mixed with the majority reflecting an uptick in business,” said Anthony Nieves, chair of ISM’s Non-Manufacturing Business Survey Committee. “A number of respondents indicate that they are negatively impacted by the government shutdown.” Forward-looking indicators seem to lean toward the possibility of slower future growth, as new domestic and export orders dipped while imports rose; also, more respondents consider current inventory levels to be too high. 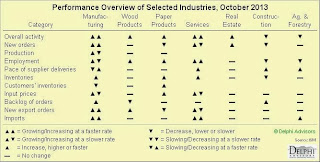 Click image for larger version
Among the individual service industries we track, only real estate expanded -- and that was only because new orders grew. For Construction and Ag & Forestry, new orders were either unchanged or slowing while imports were either stable or increasing. Employment shrank in the latter two industries.
Commodities up in price included corrugated boxes. Caustic soda was down in price. Some respondents indicated paying more for gasoline and diesel, while others reported paying less.
The foregoing comments represent the general economic views and analysis of Advisors, and are provided solely for the purpose of information, instruction and discourse. They do not constitute a solicitation or recommendation regarding any investment.