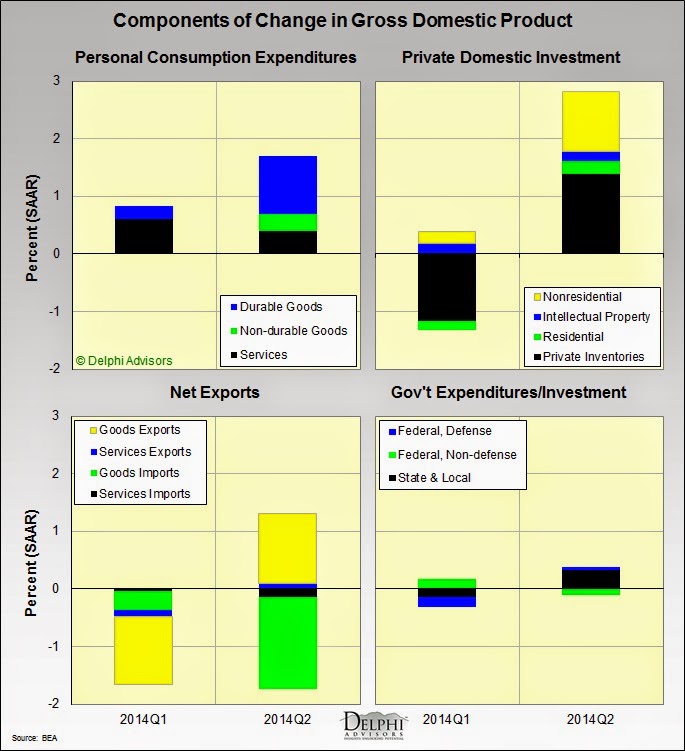 Click image for larger version
For this report the BEA assumed annualized net aggregate inflation of 2.2 percent. By way of comparison, the growth rate of the Bureau of Labor Statistics’ concurrent seasonally adjusted -U index was 3.5 percent (annualized); meanwhile, the price index reported by the Billion Prices Project () was 2.7 percent. Were the BEA’s nominal estimates corrected for inflation using the CPI-U, 2Q real would have grown by 2.9 percent; if using the inflation rate, growth would have been 3.7 percent.
Although we do not want to be guilty of looking for a cloud in the “silver lining,” we continue to question whether the U.S. economy is truly chugging along as strongly as the GDP estimate might suggest. Points to ponder along that vein include:
·     Inventories tend to create a zero-sum game over the long haul. The second quarter’s inventory growth was essentially the “flip side” of 1Q’s contraction.
·     The surge in goods exports (from subtracting 1.18 percentage points from the 1Q headline number to adding 1.22 percentage points in 2Q) seems strange in the context of apparent softening economic growth among the United States’ major trading partners.
·     Our own perception is the economy did not feel like it was growing 6.3 percentage points faster in 2Q than 1Q.
One must decide whether that phenomenal turnaround in just 90 days is genuine, or “a sign of seriously noisy numbers momentarily pointing towards implausible and/or unsustainable growth.”
The foregoing comments represent the general economic views and analysis of Delphi Advisors, and are provided solely for the purpose of information, instruction and discourse. They do not constitute a solicitation or recommendation regarding any investment.