Click image for larger version
In its third estimate of 3Q2018 gross domestic product (GDP), the Bureau of Economic Analysis (BEA) pared the growth rate of the U.S. economy to a seasonally adjusted and annualized rate (SAAR) of +3.35% (+3.5% expected), down 0.15 percentage point (PP) from the second estimate (“3Qv2”) and -0.80PP from 2Q2018.
Three groupings of GDP components -- personal consumption expenditures (PCE), private domestic investment (PDI), and government consumption expenditures (GCE) -- contributed to 3Q growth. Net exports (NetX) detracted from growth.
Although the revisions might justifiably be characterized as statistical noise -- especially since part of the retreat in the headline number resulted from a fractional increase in the GDP price index -- they generally reinforce trends apparent in the economy since 2Q. E.g., consumer spending, commercial fixed investment and exports were revised lower, while inventories were upwardly revised yet again. As for details:
Downward revisions --
Consumer spending: -0.08PP (-0.20PP relative to 2Q).
Fixed investment: -0.04PP (-0.89PP from 2Q).
Net exports: -0.08PP (-3.21PP from 2Q).
Upward revisions --
Inventories: +0.06PP (+3.50PP from 2Q).
As a consequence, real 3Q final sales of domestic product (which exclude inventories) were trimmed for a second time (-0.21PP from 3Qv2, to +1.02%), 4.30PP below the 2Q2018 estimate. 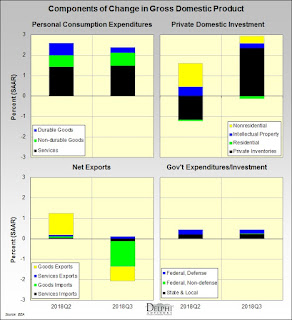 Click image for larger version
“Although none of the revisions in the report were material by themselves, their combined net effect reinforced the previous report's story -- that the growth rates for consumer and commercial spending was weakening, with inventories growing as a consequence,” remarked Consumer Metric Institute’s Rick Davis. “Additionally, foreign trade is now removing another -3.21% from the headline, quarter over quarter.
“The BEA tells us that the key number in any of their GDP reports is the ‘real final sales of domestic product.’ That number is now reported to be down an alarming -4.30% from the prior quarter.
“As we have mentioned before,” Davis concluded, “this report shows an economy that appears to be either coasting or at an inflection point. The results from the fourth quarter should tell us much more about what direction it is heading.”
The foregoing comments represent the general economic views and analysis of Delphi Advisors, and are provided solely for the purpose of information, instruction and discourse. They do not constitute a solicitation or recommendation regarding any investment.