Click image for larger version
In its third estimate of 4Q2018 gross domestic product (GDP), the Bureau of Economic Analysis (BEA) pared the growth rate of the U.S. economy to a seasonally adjusted and annualized rate (SAAR) of +2.17% (+2.2% expected), down 0.42 percentage point (PP) from the “initial” estimate (“4Qv1”) -- comparable to a combination of the more typical “advance” and “second” estimates -- and -1.18PP from 3Q2018.
Two groupings of GDP components -- personal consumption expenditures (PCE) and private domestic investment (PDI) -- contributed to 4Q growth, while net exports (NetX) and government consumption expenditures (GCE) detracted from it.
The downward revision in the headline number was driven by weaker estimates of growth in --
Most of the remaining revisions were statistical noise, except for a +0.11PP (+1.07PP from 3Q) revision to imports.

A modest reduction (-0.40PP from 4Qv1) in the contribution of private inventories reduced real 4Q final sales of domestic product (which exclude inventories). However, the final 4Q RFSDP estimate of +2.06% was 1.04PP above the 3Q2018 estimate. 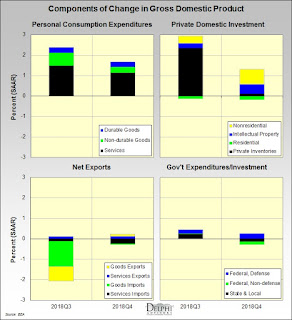 Click image for larger version
This report has some “interesting twists,” according to Consumer Metric Institute’s Rick Davis:
-- The net headline number was revised lower to the very near the bottom of the "Goldilocks" zone. This report, in itself, can't justify a change in Federal Reserve monetary policy in any direction. But at the same time it is clearly signaling an economy where the growth cycle probably peaked several quarters ago.
-- That said, a deeper dive into the numbers reveals a second consecutive quarter of weakening growth in consumer spending. And the increase in the household savings rate explains to a large extent where any additional disposable income is actually going -- into savings in lieu of spending.
The foregoing comments represent the general economic views and analysis of Delphi Advisors, and are provided solely for the purpose of information, instruction and discourse. They do not constitute a solicitation or recommendation regarding any investment.
Posted by DocH at 12:43 PM