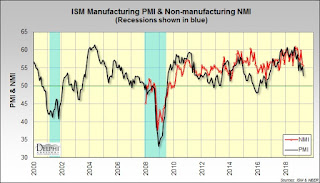 Click image for larger version
The Institute for Supply Management’s (ISM) monthly sentiment survey showed that in April the expansion in U.S. manufacturing decelerated. The registered 52.8%, down 2.5 percentage points (PP) from the March reading. (50% is the breakpoint between contraction and expansion.) ISM’s manufacturing survey represents under 10% of U.S. employment and about 20% of the overall economy. Inventories (+1.1PP) and order backlogs (+3.5PP) were the only sub-indexes exhibiting significant gains. 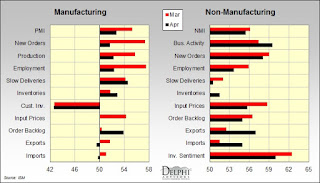 Click image for larger version
The pace of growth in the non-manufacturing sector -- which accounts for 80% of the economy and 90% of employment -- also decelerated (-0.6PP) to 55.5%. Increases in export (+4.5PP) and import (+3.5PP) orders bucked the general trend of falling sub-index values. 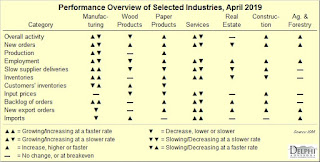 Click image for larger version
Of the industries we track, only Wood Products and Real Estate did not expand. “Spring selling season is here for residential construction,” observed one Construction respondent. “Sales are coming, but negotiations are now the norm. Traffic is higher than the last three months, mostly due to lower mortgage rates."

Commentary by Chris Williamson, Markit’s chief business economist:
Manufacturing -- "Although the PMI ticked higher in April, the survey remains consistent with manufacturing acting as a drag on the economy at the start of 2Q, albeit with the rate of contraction easing. Historical comparisons indicate that the survey’s output gauge needs to rise above 53.5 to signal growth of factory production. As such, the data add to signs that the economy looks set to slow after the stronger than expected start to the year.
"Employment growth also disappointed as hiring slipped to the lowest for nearly two years, albeit in part due to firms reporting difficulties finding staff amid the current tight labor market. “There was better news on the order book front, however, with inflows of new business rising and firms signaling an improved export performance. Unfortunately, on balance, manufacturers seem skeptical that the rise in demand will persist, with future expectations of output growth slumping lower in April.
“Both input cost and factory gate price inflation rates meanwhile eased further, down to the lowest for over one and a half years, hinting that consumer price inflation rates will have continued to cool in April.”

Services -- “The final PMI surveys for April indicate a marked slowing of the U.S. economy at the start of 2Q, suggesting the robust start to the year has lost some momentum. Businesses reported the weakest output and sales growth for two years, indicative of GDP growth slowing to 1.9% in April.
“While the first quarter saw factory weakness being offset by a robust service sector, both manufacturing and services have now shifted into a lower gear.
“An additional concern is that business optimism about the year ahead has slumped to its lowest since mid-2016, reflecting widespread reports from companies that weaker economic growth will likely further dampen business activity in coming months.
“Jobs growth has subsequently slipped to a two-year low as firms took a more cautious approach to hiring and expanding capacity in the face of the weaker sales growth and a gloomier outlook. Price pressures have fallen alongside the slower rate of economic growth signaled by the surveys, as firms struggled to raise prices amid intense competition."
The foregoing comments represent the general economic views and analysis of Delphi Advisors, and are provided solely for the purpose of information, instruction and discourse. They do not constitute a solicitation or recommendation regarding any investment.
Posted by DocH at 12:22 PM