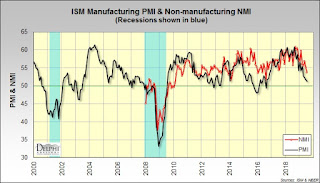 Click image for larger version
The Institute for Supply Management’s (ISM) monthly sentiment survey showed that in July the rate of expansion in U.S. manufacturing decelerated to its slowest since August 2016. The registered 51.2%, down 0.5 percentage point (PP) from the June reading. (50% is the breakpoint between contraction and expansion.) ISM’s manufacturing survey represents under 10% of U.S. employment and about 20% of the overall economy. The collapse in order backlogs (-4.3PP) overwhelmed the modest rise in new orders (+0.8PP). 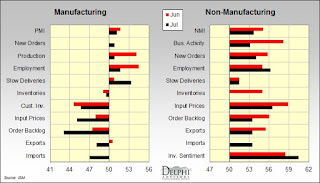 Click image for larger version
The pace of growth in the non-manufacturing sector -- which accounts for 80% of the economy and 90% of employment -- also decelerated (-1.4PP, to 53.7%) to its slowest rate since August 2016. Although service-industry inventories dropped to the breakeven 50%, they are nonetheless increasingly seen as still too high. 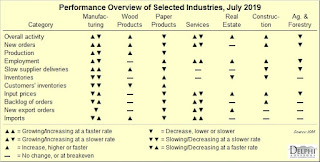 Click image for larger version
Of the industries we track, Paper Products and Ag & Forestry contracted. Respondent comments included the following:
Construction -- "Tariffs continue to push costs higher, and customers are looking for more discounts due to mortgage-rate fluctuations."

Commentary by Chris Williamson, Markit’s chief business economist:
Manufacturing -- "U.S. manufacturing has entered into its sharpest downturn since 2009, suggesting the goods-producing sector is on course to act as a significant drag on the economy in 3Q. The deterioration in the survey’s output index is indicative of manufacturing production declining at an annualized rate in excess of 3%.
“Falling business spending at home and declining exports are the main drivers of the downturn, with firms also cutting back on input buying as the outlook grows gloomier. U.S. manufacturers’ expectations of output in the year ahead has sunk to its lowest since comparable data were first available in 2012, with worries focused on the detrimental impact of escalating trade wars, fears of slower economic growth and rising geopolitical worries.
“Employment is now also falling for only the second time in almost ten years as factories pull back on hiring amid the growing uncertainty.
“More positively, new order inflows picked up for a second successive month. Although remaining worryingly subdued compared to the strong growth seen earlier in the year, the modest improvement will fuel hope that production growth could tick higher in August.”

Services -- “An improvement in the overall rate of business growth signaled by the services PMI for July is welcome news, but the overall weak pace of expansion remains a concern. The PMIs for manufacturing and services collectively point to GDP expanding at an annualized rate of under 2% in July, below that seen in 2Q and among the weakest seen over the past three years.
"A sharp drop in future expectations meanwhile suggests downside risks have increased in the near-term at least, hinting that the upturn in growth seen in July could prove short-lived and that GDP growth could remain disappointingly modest in 3Q.
"Optimism is at its lowest ebb since comparable data were first available in 2012 as companies have grown increasingly concerned about the year ahead, fueled by trade war worries and wider geopolitical jitters, as well as growing worries that the economic cycle has peaked."

Commenting on the J.P.Morgan Global Composite PMI, Olya Borichevska, from Global Economic Research at J.P.Morgan, said: “The July PMI data tell a story of two diverging sectors. Although the pace of expansion in global economic output and new orders rose to three-month highs, this was mainly driven by improved growth at service providers. In contrast, manufacturers continued to struggle, hit hard by the weakening trend in international trade flows. The outlook also became less positive, with the Future Output Index falling to its lowest level in the series history.”
The foregoing comments represent the general economic views and analysis of Delphi Advisors, and are provided solely for the purpose of information, instruction and discourse. They do not constitute a solicitation or recommendation regarding any investment.
Posted by DocH at 10:18 AM