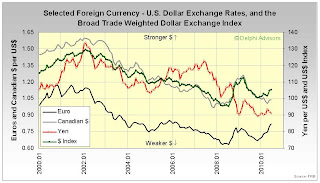 Click on table for larger image
Canada: The loonie’s gain against the U.S. dollar occurred despite a stall in economic growth. Real gross domestic product was unchanged in April after seven consecutive monthly increases. A large decline in retail trade and smaller declines in manufacturing and utilities were offset by increases in mining, wholesale trade and, to a lesser extent, the public sector and construction.

Part of the loonie’s support derived from Russia’s addition of the currency to its foreign reserves. Russia's push to diversify reserves "is more a result of their desire to do something in response to the extreme volatility of the dollar and the euro," said Elena Matrosova, a Moscow-based economist at BDO International.

Europe: The euro’s depreciation against the greenback coincided with more bad news for the region – including a downgrade of Greece’s government bond rating to junk status. Concerns over the economic health of the so-called peripheral European nations caused bond yields – particularly those of Greece and Spain – to continue rising.

Not all of the news coming out of the 16-nation euro area is bad, however; a number of statistics are fairly positive. For example, GDP expanded in 1Q2010, and the external trade surplus jumped six-fold in April. The unemployment rate appears to have stabilized (although at an admittedly high 10 percent). Industrial new orders rose for a third consecutive month in April and represented the steepest annual percentage increase since May 2000.

Japan: The yen appears to have benefited from investors running from the euro. Whether that move will ultimately prove to be a wise one remains to be seen. Although the Bank of Japan stated the economy in that country "shows further signs of a moderate recovery, induced by improvement in overseas economic conditions," that recovery apparently still needs another $32.8 billion in new lending. Falling consumer prices, slower-than-expected increases in exports, and a surprising spike in the unemployment rate seem to have spooked the Bank.

China: Because China’s currency does not trade freely against the U.S. dollar, our interest in that country primarily centers around whether it will continue buying U.S. debt. A year after criticizing U.S. fiscal policy as "irresponsible," the answer to that question appears to be “yes” – at least for the time being. China boosted holdings of Treasury notes and bonds by 2.6 percent to $900.2 billion in March and April, after reducing its stake by 6.5 percent from November through February, the longest consecutive monthly declines in a decade.
Posted by DocH at 8:13 AM