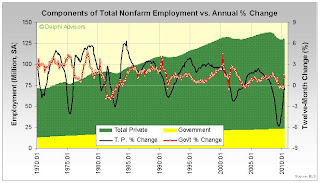 Click on graph for larger image
U.S. employment fell for the first this year in June as thousands of temporary census jobs ended and private hiring grew less than expected. Total nonfarm payroll declined by 125,000, reflecting a decrease (-225,000) in the number of temporary employees working on Census 2010. Private-sector payroll employment edged up by 83,000.

One might be tempted to take encouragement from the news that the number of unemployed persons, at 14.6 million, and the unemployment rate, at 9.5 percent, edged down in June; unfortunately, the underlying cause for those declines is that more people stopped looking for work, and thus were not counted as unemployed – not because of a sudden burst in hiring. 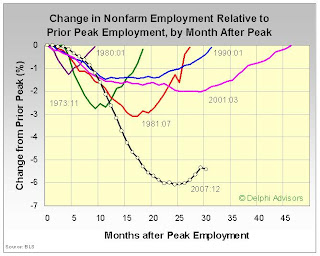 Click on graph for larger image
"Overall, [the employment report is] weak with very little breadth in new hiring," said John Herrmann, a senior fixed-income strategist at State Street Global Markets. "This will lead to second-half consumption growth well below the first half."

With unemployment stubbornly high, recent sluggish household spending is threatening to tip the economy back into recession. Moreover, federal decision makers are about out of ammunition in terms of what else they might try. "We are in a difficult situation. I don't think there is political will to have another stimulus program and even if we did I am not sure people feel it would be that effective," said Stephen Bronars, a senior economist at Welch Consulting. 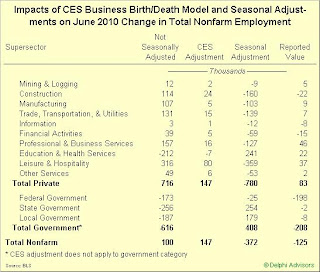 Click on table for larger image
It is noteworthy that 147,000 of the 863,000 (nearly one in five) not-seasonally adjusted private sector jobs came from the Current Employment Statistics (CES) models. The Bureau of Labor Statistics uses the CES models to account for business closings and openings that occurred recently enough that they were not captured in the employment survey. Because these numbers are statistically derived, many analysts refer to them as “ghost” jobs. Those models do no always perform well, so their results should be taken with a grain of salt.

Also noteworthy is the observation that, although 225,000 Census 2010 workers were “sent packing,” federal government employment fell by only 173,000. That means 52,000 other – most of them presumably full-time – employees were added to the federal payroll. Hiring among state and local governments appears to be in full-scale retreat, however.
Posted by DocH at 8:34 PM