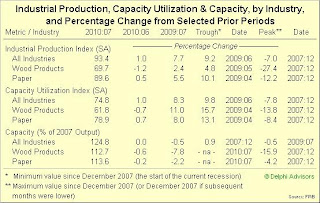 Click image for larger version
According to the Federal Reserve's G.17 report, industrial production edged up by 1.0 percent in July (the fifth monthly increase this year), reversing June’s 0.1 percent decline. Much of the jump in manufacturing output was attributed to an increase of nearly 10 percent in the production of motor vehicles and parts; even so, manufacturing production excluding motor vehicles and parts advanced 0.6 percent. The output of mines rose 0.9 percent; and utilities, +0.1 percent. At 93.4 percent of its 2007 average, total industrial production in July was 7.7 percent above its year-earlier level. 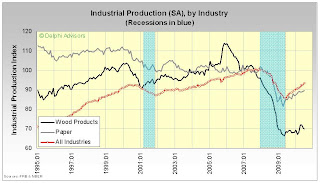 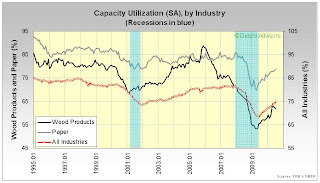 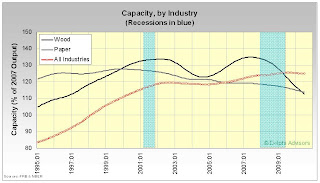 Click image for larger version
Although additional forest products manufacturing capacity was shuttered in July, perhaps the most noteworthy aspect of the report was that the fall-off at the all-industries level slowed to a virtual standstill. It remains to be seen whether that outcome signals an impending turnaround or is just a pause in the downward trend. Our guess would favor the latter option given all of the other headwinds challenging the U.S. economy at the moment; but, as we have previously indicated, rising capacity utilization will slow and ultimately reverse the capacity drawdown. For now, the amount of existing excess capacity helps to keep prices relatively stable at the consumer level because manufacturers can ramp up output with existing production infrastructure. It will be a different story, though, if and/or when new capacity must be built to meet demand.
Posted by DocH at 12:32 PM