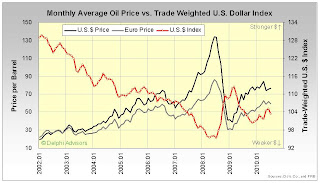 Click image for larger view
The monthly average U.S.-dollar price of West Texas Intermediate crude oil extended gains into July, ticking up by $1.02 (1.4 percent), to $76.37 per barrel. That price increase coincided with a weaker dollar, and occurred despite the lagged impacts of a slight setback in consumption of roughly 0.1 million barrels per day (BPD) in May, and crude stocks that remain above the average five-year range. 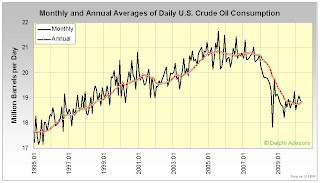 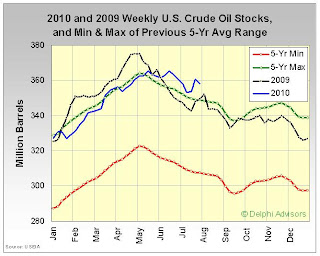 Click image for larger view
After over 100 days since the well blowout and an estimated five million barrels of crude spewed into the Gulf of Mexico, BP appears to have essentially completed the process of capping its leaking Macondo well. The well pressure is now being controlled by the hydrostatic pressure of the drilling mud, which is the desired outcome of the “static kill” procedure carried out on August 3.
Interestingly, despite the seemingly immense volume of oil released by the accident, cleanup crews are finding little crude to deal with. Apparently, as ABC News put it, “The light crude began to deteriorate the moment it escaped at high pressure, and then it was zapped with dispersants to speed the process along. The oil that did make it to the ocean's surface was broken up by 88-degree water, baked by 100-degree sun, eaten by microbes, and whipped apart by wind and waves.”
It is entirely possible that the criminal and civil trials brought against BP could far outlast any environmental consequences of the accident.
Posted by DocH at 6:22 PM