Click image for larger version
The Bureau of Economic Analysis (BEA) reported that the rate of growth in real U.S. gross domestic product (GDP) accelerated more in 3Q2010 than originally estimated. The U.S. economy expanded at a 2.6 percent annual rate (the original estimate was 2.0 percent), up from 1.7 percent in the previous quarter. 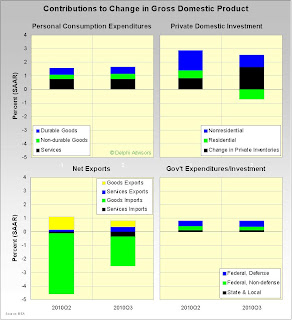 Click image for larger version
At first glance, the upward revision seems encouraging. Digging into the details reveals a somewhat different story. Dean Baker, co-director of the Center for Economic and Policy Research in Washington, D.C., explains why:

“The reported rate of inventory accumulation in the third quarter was $121.4 billion (in 2005 dollars), the fastest pace ever. This added more than 1.6 percentage points to the rate of GDP growth in the quarter.

It is very unlikely that this pace of inventory growth will be sustained…, because the upward revision to GDP growth was based on more rapid accumulation of inventories it should not be viewed as a positive for the economy’s growth prospects.

“Inventories have been growing rapidly and contributing to the growth in GDP, but if historical trends persist, that growth is about to come to an end. When it does, the growth rate of GDP will slow down unless some other component of GDP grows faster to compensate. However, it’s hard to see how that will happen. The original stimulus package is coming to an end in the first two quarters of 2011, state and local governments continue to face large budget shortfalls, housing prices are still falling which will continue to place a drag on consumption, businesses are waiting for positive news about the economy -- business investment will follow the economy, not lead -- government is being pushed toward deficit reduction, Europe is struggling, and when these and other factors acting as headwinds against GDP growth are factored in, it’s hard to be optimistic about growth in coming quarters. Note also that a 2.6 percent growth rate, while close to the historical average, only helps us to tread water. A 2.6 percent growth rate keeps us from losing more ground, but it is not fast enough to make up for past losses. Thus, even the 2.6 percent rate was less than we need.

“Let’s hope this pessimistic view of our prospects for growth in coming quarters is wrong, but it’s hard to see how the 2.6 percent growth rate we had in the third quarter can continue unless some other sector of the economy grows at an unexpectedly high rate.”
Posted by DocH at 12:27 PM