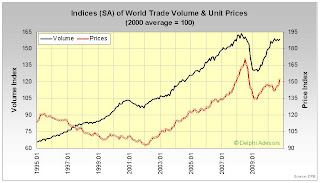 Click image for larger view
According to data compiled by the Netherlands Bureau for Economic Policy Analysis, world trade volume grew by 0.5 percent in October from the previous month, following an upwardly revised decrease of 0.4 percent in September. October’s regional patterns were rather diverse: Import growth was highest in emerging Asia. United States imports declined for a second consecutive month, while its exports shot up by 3.5 percent. In Latin America both imports and exports declined substantially (by 4 percent to 5 percent).

Because monthly trade figures are volatile, it may be more useful to concentrate on “momentum” (defined as the change in the three-month moving average). Trade momentum flat in October. It has been decreasing steadily since January, when it reached 6.1 percent. Third quarter world trade growth has been revised down from 0.9 percent to 0.3 percent (non-annualized) using new information on trade prices in major Asian and Latin American countries. As a result, volume estimates for these countries turned out to be considerably lower over the last couple of months.

Although the trade volume increase was rather muted in October, price changes were less so. Prices jumped over 3 percent between September and October, and are up almost 5.2 percent from July 2010. 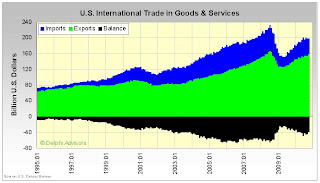 Click image for larger view
As mentioned above, the U.S. goods and services deficit shrank to $38.7 billion, down from a revised $44.6 billion deficit in September. Total October exports were $158.7 billion and imports were $197.4 billion. 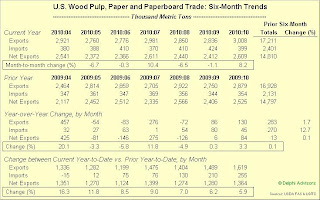 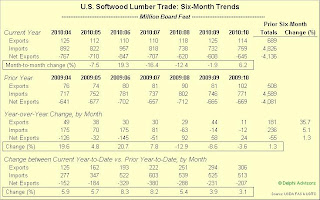 Click image for larger view
Softwood lumber exports did not contribute to the narrowing trade deficit in October, as exports shrank (by 11 MMBF, or 8.8 percent) while imports expanded (27 MMBF, or 3.7 percent). However, lumber exports remain above year-earlier levels; imports are lower.
Posted by DocH at 12:36 PM