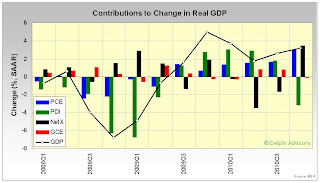 Click image for larger version
The Bureau of Economic Analysis (BEA) reported that the rate of growth in real U.S. gross domestic product (GDP) accelerated slightly in 4Q2010 relative to 3Q. The U.S. economy expanded at a 3.2 percent annual rate, up from 2.6 percent in the previous quarter. Personal consumption expenditures (PCE) and net exports (NetX) contributed to growth while private domestic investment (PDI) subtracted from it. Government consumption expenditures were essentially a “wash.” 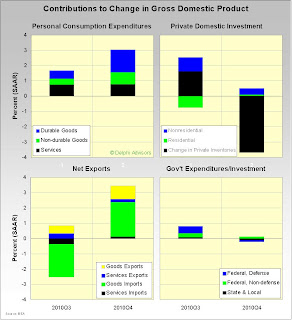 Click image for larger version
The report’s details raise some questions. First, how could PCE expand if real gross domestic purchases -- purchases by U.S. residents of goods and services wherever produced -- decreased by 0.3 percent and net exports rose?

Second, a supposed drop-off in imports contributed to GDP growth for the first time since 2Q2009. But did imports really fall? According to Census Bureau estimates, imports averaged $198.1 billion per month during 3Q2010 and $197.4 billion per month during the first two months of 4Q2010 for which data are available. Note that those are nominal, not inflation-adjusted, amounts. It would hardly seem that a $700 million-per-month decline in imports between 3Q and 4Q would boost GDP by the amount claimed. So, unless 4Q import prices rose substantially to amplify the nominal drop in imports, their contribution to GDP growth would certainly be suspect. As it turns out, though, import prices did in fact rise during 4Q, particularly for goods imports, and by a wide margin -- +21.8 percent on an annualized basis, from 3Q’s -9.2 percent. That 31 percentage point swing in goods import prices was enough to reduce the 4Q impact of imports to the point that they boosted GDP growth. Such are the vagaries of changes in percentages when computing statistics.

So, our takeaway of the GDP report is that economic activity increased during 4Q2010 on a combination of suspect consumer-fueled spending and statistical peculiarities, not because of a healthier and sustainable expansion to the means of production.
Posted by DocH at 1:30 PM