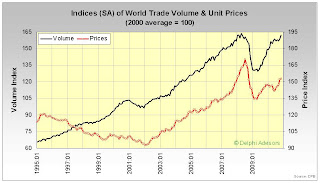 Click image for larger view
According to data compiled by the Netherlands Bureau for Economic Policy Analysis, world trade volume jumped by 2.3 percent in November from the previous month, following an upwardly revised increase of 1.0 percent (originally 0.5 percent) in October. The upsurge was due primarily to an acceleration of trade flows into and out of emerging economies. Emerging economies’ import volume went up by a “staggering” 5.1 percent. With the exception of Africa and the Middle East, all emerging regions contributed to the surge, import growth being highest in emerging Asia. The same pattern was mirrored on the export side: Emerging countries’ export volume grew 3.2 percent overall. Advanced economies’ healthy import growth of 1.0 percent was led by the Euro Area and Japan. In Japan a series of four monthly declines came to an end. U.S. imports continued to decline, while exports contracted in both the United States and Japan.

Although the trade volume increase was quite dramatic in November, price changes were less so. Prices ticked up by only 0.2 percent, but are almost 7.8 percent higher than in June 2010. 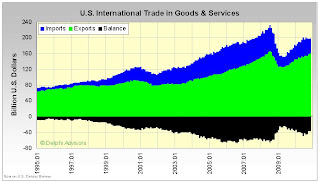 Click image for larger view
The U.S. goods and services deficit shrank to $38.3 billion in November, virtually unchanged from October’s $38.4 billion. Total November exports were $159.6 billion and imports were $198.0 billion. Import growth has been essentially flat since last June, while exports have trended higher by about $1.4 billion per month -- far slower than the rate needed to meet the White House goal of doubling January 2010’s exports by 2015. Doubling will not be achieved until early 2018 at the current rate of growth. 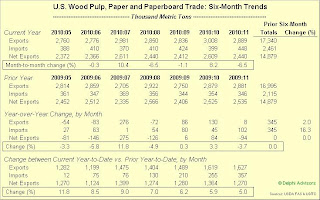 Click image for larger view
U.S. paper exports did not contribute to the rise in overall exports; they shrank by 119,000 metric tons (-4.0 percent) while imports rose by 49,000 tons (12.3 percent). Both imports and exports remained above year-earlier levels. 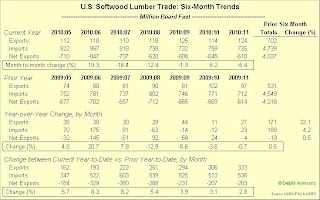 Click image for larger view
Softwood lumber exports rose by a meager 10 MMBF (8.8 percent) in November; imports fell by a greater margin in absolute terms (-14 MMBF, or 3.2 percent). As with paper, both lumber exports and imports remain above year-earlier levels.
Posted by DocH at 4:38 PM