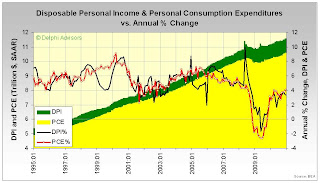 Click image for larger view
Consumers appear to be forgetting some of the lessons learned during the past recession. Bureau of Economic Analysis data showed that disposable personal income (DPI) increased $47.3 billion (0.4 percent) in December. Personal consumption expenditures (PCE) increased $69.5 billion (0.7 percent). Real, inflation-adjusted DPI increased 0.1 percent while real PCE increased 0.4 percent. Whether in nominal or real terms, then, growth in spending outstripped that of incomes during December. 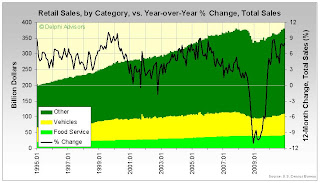 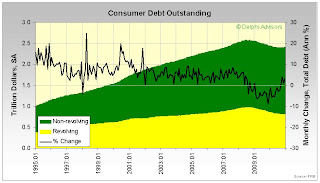 Click image for larger view
Total consumer debt outstanding increased for a third month in December, at an annual rate of 3.0 percent. Revolving credit (i.e., credit cards) increased at an annual rate of 3.5 percent -- the first monthly increase since July 2008, while nonrevolving credit increased at an annual rate of 2.8 percent. For once, the report details are consistent with the headline in that the credit increase appears to have been truly consumer driven. Specifically, finance companies were the largest source of change in credit (+$25.4 billion, not seasonally adjusted). During the previous several months, virtually all of the increase had been due to jumps in Federal Government debt.
Posted by DocH at 10:30 PM