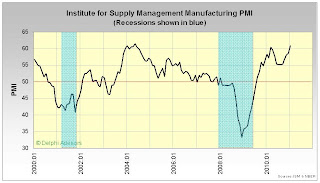 Click image for larger version
Manufacturing exhibited considerable strength in January, with the Institute for Supply Management’s (ISM) PMI jumping by 2.3 percentage points. "The manufacturing sector grew at a faster rate in January as the PMI registered 60.8 percent, which is its highest level since May 2004,” said Norbert Ore, chair of ISM’s Manufacturing Business Survey Committee. "The continuing strong performance is highlighted as January is also the sixth consecutive month of month-over-month growth in the sector. New orders and production continue to be strong, and employment rose above 60 percent for the first time since May 2004. Global demand is driving commodity prices higher, particularly for energy, metals and chemicals." 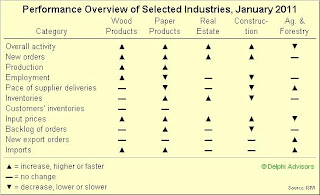 Click image for larger version
The pace of growth of the non-manufacturing sector also picked up again in January, thanks to a 2.3 percentage point (to 59.4 percent) increase in its NMI/PMI. Once again, Real Estate and Construction both shared in that expansion while Ag & Forestry contracted.