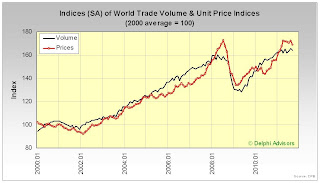 Click image for larger view
According to data compiled by the Netherlands Bureau for Economic Policy Analysis, world trade volume declined by 1.0 percent in September from the previous month, following a revised increase of 1.4 percent in August. Imports declined in advanced and emerging economies. Exports of the advanced countries rose a little, thanks to the performance of the United States and Japan. Exports of the emerging markets fell, particularly in Asia and Central- and Eastern Europe. Prices fell 1.9 percent in September, to 25.8 percent above their February 2009 low. 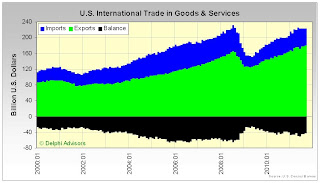 Click image for larger view
The U.S. goods and services deficit was $43.1 billion in September, down from a revised $44.9 billion in August. Exports amounted to $180.4 billion and imports $223.5 billion. According to Barron’s, about half of the unexpected improvement in the deficit came from gold exports. 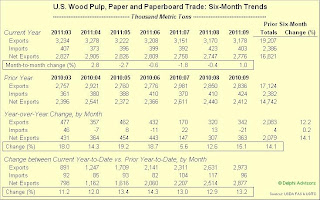 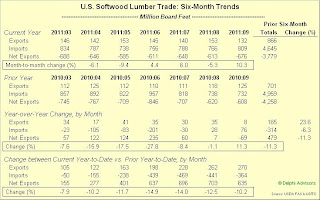 Click image for larger view
Softwood lumber exports fell by 21 MMBF (13.5 percent) in September while imports advanced by 42 MMBF (5.5 percent). Exports were 8 MMBF (6.2 percent) higher than year-earlier levels, and imports were 78 MMBF (10.4 percent) higher.
Posted by DocH at 11:52 AM