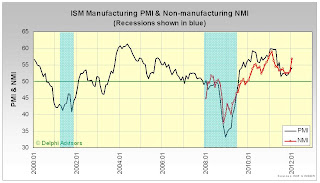 Click image for larger version
The pace of growth in manufacturing extended gains in January, with the Institute for Supply Management’s (ISM) PMI rising to 54.1 percent, from 53.9 in December (50 percent is the breakpoint between contraction and expansion). After reciting some report details, Bradley Holcomb, chair of ISM’s Manufacturing Business Survey Committee, wrapped up his comments by saying, “Manufacturing is starting out the year on a positive note, with new orders, production and employment all growing in January." 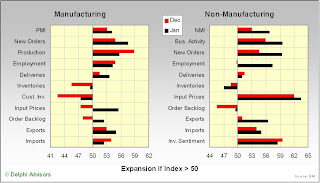 Click image for larger version
The non-manufacturing sector jumped higher in January, reflected by a 3.8 percentage point rise (to 56.8 percent) in the non-manufacturing index (now known simply as the “NMI”). "Respondents' comments are mostly positive about business conditions. There is concern about cost pressures and the sustainability of the recent spike in activity,” concluded Anthony Nieves, chair of ISM’s Non-Manufacturing Business Survey Committee. 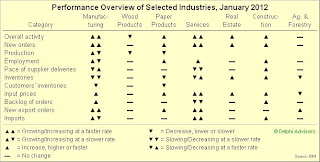 Click image for larger version
The only reported change in Wood Products reflected a slowdown in production. Despite the lack of encouraging news, at least some Wood Products participants are seeing light at the end of the tunnel. "Market conditions appear to be improving, with the outlook for 2012 better yet," said one Wood Products respondent. Paper Products expanded, the only “negative” being rising input prices. "Once again, business continues to be strong," said one Paper Products contributor. Real Estate and Construction both reported expansion in overall activity, while Ag & Forestry was unchanged.

As the bar chart and table above indicate, input prices moved higher in January: that was a reversal of fortunes for manufacturing, but a continuation of the trend in the service sector.

Paper, diesel fuel and gasoline were up in price. The only relevant commodity down in price was corrugated cartons. No. 2 diesel fuel was listed in short supply.
Posted by DocH at 4:06 PM