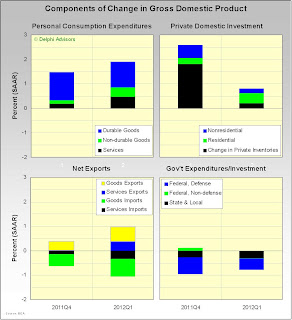 Consumer Metrics Institute (CMI) made the following observations about the GDP report:

-- The contribution to the annualized growth rate for consumer expenditures for goods weakened very slightly to 1.44 percent, (down from 1.47 percent in the prior report, but still up 0.15 percent from the 1.29 percent for 4Q2011).

-- The contribution made by consumer services also deteriorated (to 0.47 percent).

-- The growth rate contribution from private fixed investments improved significantly to 0.61 percent (up from 0.18 percent in the last report). But this number was nearly completely offset by a drop in the contribution made by inventories (now 0.21 percent, down substantially from the 0.59 percent reported earlier).

-- The reported drag on GDP growth from contracting expenditures by governments grew somewhat at -0.78 percent, now nearly the same as the -0.84 percent reported for 4Q-2011. The largest share of the contractions continued to be federal defense spending, although state and local governments still provided a net -.30 percent contribution to the headline number.

-- The annualized contribution to the growth rate from exports rose to 0.98 percent (up from 0.73 percent in the prior report and materially improved from the 0.37 percent contribution provided in the prior quarter).

-- Imports are now removing -1.05 percent from the growth rate of the overall economy, significantly worse than the -0.63 percent recorded during 4Q2011. The net of foreign trade was still very slightly negative (subtracting -0.05 percent from the headline number).

-- The annualized growth rate of "real final sales of domestic product" rose to 1.67 percent, but it is still a 1.49 percent below the +3.16 percent reported for 3Q2011. This report's improvement is largely the result of a weakening in the growth of inventories. If this number is accepted at face value (and not as a consequence of deflators playing havoc with inventory valuations) it still indicates a much weaker economy than is conveyed in the headline number.