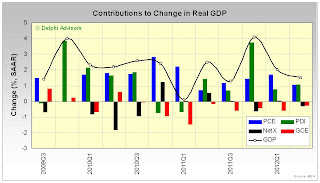 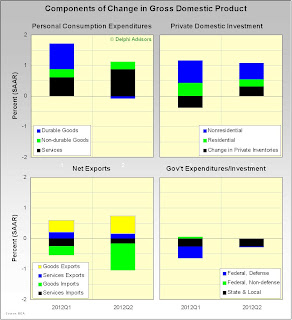 -- The overall annualized growth rate is weakening. By any measure it is already far weaker than we might expect based on historical trends for the third year of a recovery.

-- The consumer is not the driving force behind the recovery (such as it is). During the most recent quarter the growth in consumer spending for goods contributed only 0.18 percent to the headline number. And although real per capita disposable income did grow at a 2.54 percent annualized rate during the quarter, it has only just now recovered to the level recorded during the first quarter of 2011 -- some five quarters ago.

-- And (perhaps unfortunately from the market's perspective) this report provides cover for the Federal Reserve to do nothing dramatic just prior to the Presidential election. A 1.54 percent annualized growth rate hardly justifies any heroics in any new round of QE monetary interventions -- which could smack of pre-election tinkering from an ostensibly non-political entity.
Posted by DocH at 4:16 PM