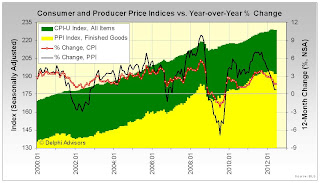 The seasonally adjusted Consumer Price Index was unchanged in June. Over the last 12 months, the all items index increased 1.7 percent before seasonal adjustment.

The energy index continued to fall in June, but its decline was offset by increases in the indexes for food and all items less food and energy. The energy index fell 1.4 percent as the gasoline index declined for the third month in a row; other energy indexes were mixed. The food index rose 0.2 percent after being unchanged last month as the index for food at home turned up in June. 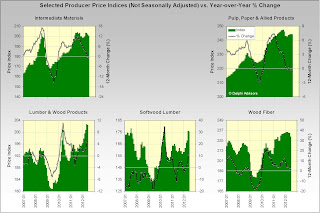 Prices of both intermediate materials and pulp, paper & allied products are lower than they were a year earlier, but softwood lumber is up 11.0 percent.

Click image for larger version
Posted by DocH at 8:28 AM