Click image for larger version
According to the Bureau of Economic Analysis' (BEA) “final” estimate, 2Q2014 growth in real U.S. gross domestic product () expanded at a seasonally adjusted and annualized rate of 4.6 percent. The revised 2Q rate of expansion is 0.6 percentage point greater than the initial (“advance”) estimate, and 6.7 percentage points above 1Q’s -2.1 percent contraction. This is the best positive quarter-to-quarter improvement in GDP growth since 2Q2000, and the second best since the 2Q1982. Three of the four categories -- personal consumption expenditures (PCE), private domestic investment (PDI), and government consumption expenditures (GCE) -- contributed to 2Q growth; net exports (NetX) subtracted from growth.
The positive revisions to 2Q's growth contributions were in:


The only downward revision was to imports (-0.03 percentage point).
Growth in real final sales of domestic product, the BEA’s “bottom line” indicator of economic health (which excludes the ever-volatile inventories) improved by about a half percentage point, to +3.17 percent. 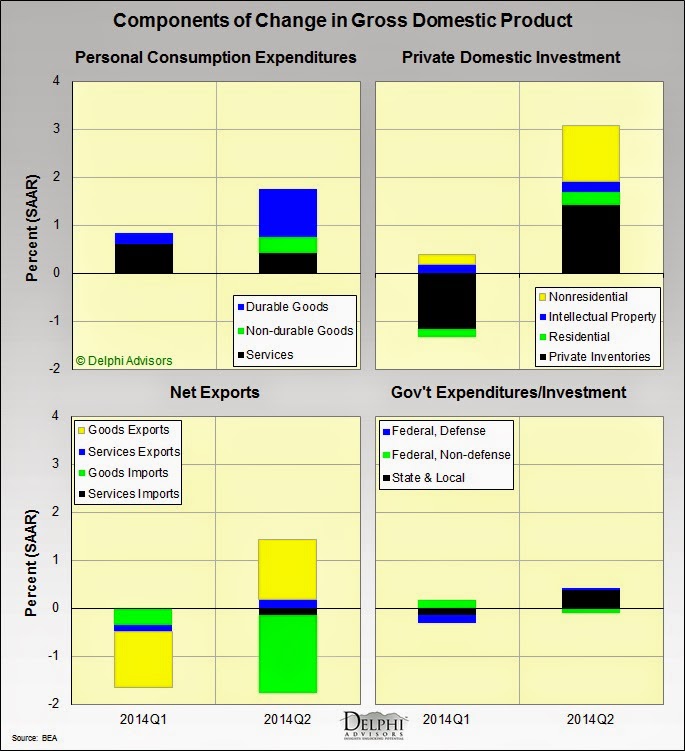 Click image for larger version
For this report the BEA assumed annualized net aggregate inflation of 2.15 percent. By comparison, the growth rate of the Bureau of Labor Statistics’ concurrent seasonally adjusted -U index was 3.53 percent (annualized); meanwhile, the price index reported by the Billion Prices Project () was 2.72 percent. Were the BEA’s nominal estimates corrected for inflation using the CPI-U, 2Q real would have grown by 3.3 percent; if using the inflation rate, growth would have been 4.1 percent.
Taken at “face value,” this report strengthens the Federal Reserve’s hand for completing its quantitative easing “taper” in October. We caution against a face-value reading, though, for the following reasons:


The foregoing comments represent the general economic views and analysis of Delphi Advisors, and are provided solely for the purpose of information, instruction and discourse. They do not constitute a solicitation or recommendation regarding any investment.
Posted by DocH at 3:03 PM