May 2017 ISM and Markit Surveys 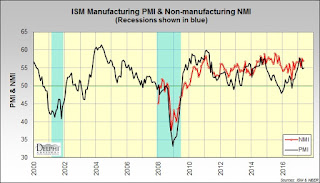 Click image for larger version
“Soft” data from the Institute for Supply Management’s (ISM) monthly opinion survey showed that the expansion in U.S. manufacturing was essentially stable in May. The registered 54.9%, up 0.1 percentage point from April. (50% is the breakpoint between contraction and expansion.) ISM’s manufacturing survey represents under 10% of U.S. employment and about 20% of the overall economy. Four of the sub-indexes (new orders, employment, and both inventory categories) had higher values, while six had lower values. 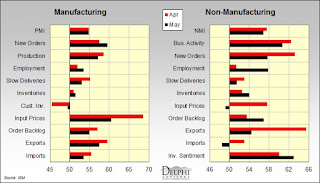 Click image for larger version
The pace of growth in the non-manufacturing sector -- which accounts for 80% of the economy and 90% of employment -- slowed modestly when retreating by 0.6 percentage point, to 56.9%. Four sub-indexes (employment, inventories, order backlogs, and inventory sentiment) exhibited higher values, while six were lower. 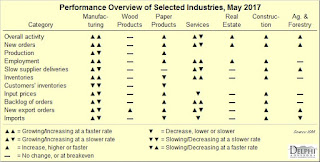 Click image for larger version
Of the industries we track, only Wood Products did not expand. “Our business is definitely paying attention to developments with the Canadian lumber tariff announcement,” wrote one Paper Products respondent. “The final outcome could change our fiber pricing.” A Construction commenter observed that “lumber tariff effects are beginning to show up.” A Public Administration respondent mentioned "continuing to feel [the] effect of overheated commercial construction market -- few bidders, higher prices. Scarce construction labor seems to be the driver."
Relevant commodities --
* Priced higher: Construction trades/subcontractors; corrugate and corrugated boxes; diesel; labor (including general, service, temporary, and construction); lumber; and oil.
* Priced lower: None.
* Prices mixed: Gasoline.
* In short supply: Labor (including general, service, skilled, and construction).

Services -- “Although service sector business activity picked up in May, the PMI surveys for manufacturing and services collectively indicate only a modest pace of economic growth so far in the second quarter.
“Historical comparisons with GDP indicate the PMI is signaling second quarter GDP growth of just over 2%, suggesting there may be some downside risks to IHS Markit’s current forecast of a GDP growth rebound to just over 3% in the second quarter.
“However, the key message from the PMI is that the economy is enjoying steady, albeit unspectacular, growth, and that the pace of expansion has been slowly lifting higher in recent months.
“Hiring meanwhile remains on a firm footing, with the survey’s employment indicators running at levels consistent with around 160,000 jobs added to the economy in May.
“In another sign of the economy’s underlying steady expansion, average prices charged for goods and services is running at the second highest in almost two years, indicating that rising demand is helping restore some pricing power.”
The foregoing comments represent the general economic views and analysis of Delphi Advisors, and are provided solely for the purpose of information, instruction and discourse. They do not constitute a solicitation or recommendation regarding any investment.
Posted by DocH at 9:24 PM