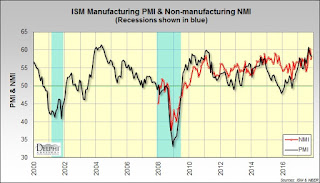 Click image for larger version
The Institute for Supply Management’s (ISM) monthly sentiment survey suggested that the expansion in U.S. manufacturing decelerated further in November. The registered 58.2%, down 0.5 percentage point. (50% is the breakpoint between contraction and expansion.) ISM’s manufacturing survey represents under 10% of U.S. employment and about 20% of the overall economy. Of the economically intuitive sub-indexes, only new orders, production and imports exhibited higher values in November than in October. 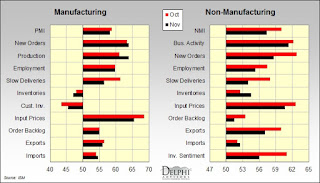 Click image for larger version
The pace of growth in the non-manufacturing sector -- which accounts for 80% of the economy and 90% of employment -- also decelerated (-2.7 percentage points) to 57.4%. Inventories and imports were the only sub-indexes with higher values in November. 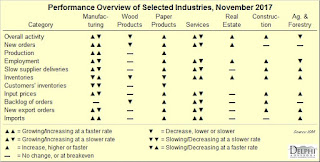 Commenting on the data, Chris Williamson, Markit’s chief business economist said --
Manufacturing: “US manufacturers reported further solid growth in November. The rate of expansion settled slightly after October’s rebound from the hurricanes, but still leaves the sector on course for its best quarter since the opening months of 2015.
“What’s especially encouraging is that growth is being led by producers of business equipment and machinery, indicating investment spending is on the rise.
“Jobs growth in the sector has also picked up in recent months compared with the subdued hiring earlier in the year, suggesting that an expansionary mood is beginning to prevail in the goods producing sector. Business optimism is now at its highest since the start of 2016, underscoring how firms believe the upturn has further to run as we move into 2018.
“Prices continued to rise at an increased rate, linked to higher costs, though in many cases the price hikes were linked to ongoing supply chain disruptions since the hurricanes, suggesting inflationary pressures should start to cool soon, at least in terms of manufacturing costs.”

Services: “The slowest growth of service sector business activity since June, alongside a slight dip in the pace of manufacturing expansion, means the November PMI surveys registered a modest cooling in the overall rate of business growth. Mid-way through the fourth quarter, the surveys are still pointing to a reasonable GDP growth rate of approximately 2.5%.
“The surveys’ employment indices are meanwhile pointing to solid non-farm payroll growth of [around] 200,000 as companies continue to take on staff in encouraging numbers to meet rising order books.
“Disappointingly, optimism about the year ahead deteriorated as companies grew increasingly cautious about the outlook for 2018, suggesting risk aversion may start to rise, which could hit hiring and investment. However, for now, businesses generally remain in expansion mode and the upturn shows few signs of losing momentum to any significant extent.
“In terms of prices, the upturn continues to show signs of gradually feeding through to higher inflationary pressure. Average selling prices for goods and services showed one of the largest increases recorded over the past four years, linked to rising cost pressures.”
The foregoing comments represent the general economic views and analysis of Delphi Advisors, and are provided solely for the purpose of information, instruction and discourse. They do not constitute a solicitation or recommendation regarding any investment.
Posted by DocH at 9:02 AM