May 2018 ISM and Markit Surveys 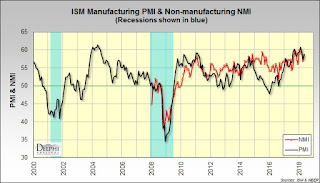 Click image for larger version
The Institute for Supply Management’s (ISM) monthly sentiment survey showed that the expansion in U.S. manufacturing accelerated in May. The registered 58.7%, up 1.4 percentage points (PP) from the April reading. (50% is the breakpoint between contraction and expansion.) ISM’s manufacturing survey represents under 10% of U.S. employment and about 20% of the overall economy. “[The PMI reading] indicates strong growth in manufacturing for the 21st consecutive month, led by continued expansion in new orders, production and employment. However, inventories are struggling to maintain expansion levels, and suppliers continue to deliver at essentially the same rate as the previous month, relative to production,” said Timothy Fiore, Chair of ISM’s Manufacturing Business Survey Committee.
Also, the Prices Index inched up to its highest level since May 2011; 62.2% of respondents reported paying higher prices, 3.1% reported paying lower prices, and 34.7% of supply executives reported paying the same prices as in April. 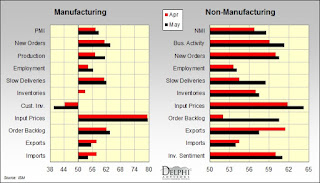 Click image for larger version
The pace of growth in the non-manufacturing sector -- which accounts for 80% of the economy and 90% of employment -- also rebounded (+1.8PP) to 58.6%. Services’ price index was less of an outlier; still, 41% of respondents reported higher prices whereas 54% indicated no change in prices paid. 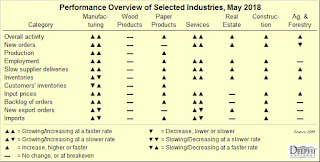 Click image for larger version
All of the industries we track except Wood Products expanded in May. Respondent comments included the following --
·     Construction: "Material prices have been difficult to predict this year, and suppliers have struggled to hold prices for any extended period on quotes, specifically on lumber and lumber-related products. The instability has proven frustrating, but a larger problem is that we are starting to see longer lead times in many of the same areas that could start impacting timelines if they continue to get worse as we get into the main building season."

Commenting on the data, Chris Williamson, Markit’s chief business economist said --
Manufacturing: “The U.S. manufacturing sector enjoyed another bumper month in May, though continues to run hot.
“The past two months have seen the strongest back-to-back improvements in order books since the fall of 2014, fueled by strengthening domestic demand. New orders have in fact now grown at a faster rate than output in each of the past five months, highlighting how producers have struggled to boost production to meet sales. In the words of one manufacturer, “we’re selling more than we can make”.
“The upturn has stretched supply chains to the extent that May saw the greatest lengthening of delivery times in the near-ten year history of the survey. Producers are also finding it difficult to find suitable staff.
“With sales growing faster than production, backlogs of work are accumulating at the fastest rate for nearly four years, which should support further production growth in coming months. Business expectations regarding future production in fact picked up again to one of the highest levels seen over the past three years, adding to signs that strong growth will persist through the summer months.”

Services: “The U.S. economy kicked up a gear in May. A markedly improved service sector performance takes the final composite PMI reading above the flash estimate and to its highest for over three years. The composite PMI is a reliable leading indicator of GDP, and has risen to a level which is consistent with the economy growing at an annualized rate of approximately 3.5%.
“With business optimism about the year ahead running at one of the highest levels seen over the past three years, it looks likely that good growth momentum will be sustained in coming months.
“However, the survey also reveals increased concerns regarding rising costs and the impact of tariffs. Across both manufacturing and services, companies’ costs are now rising at one of the strongest rates seen over the past seven years, which will likely feed through to higher consumer prices in coming months.”
The foregoing comments represent the general economic views and analysis of Delphi Advisors, and are provided solely for the purpose of information, instruction and discourse. They do not constitute a solicitation or recommendation regarding any investment.
Posted by DocH at 10:11 AM