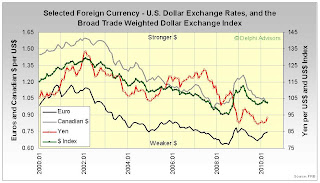 Click on table for larger image
Canada: Much of the loonie’s strength derived from the fact that Canadian GDP expanded by 0.3 percent in February (3.6 percent annualized), mainly on the strength of manufacturing (+1.2 percent). The mining sector, with the exception of oil and gas extraction, also contributed (+0.4 percent) to growth in February. In addition, some industries benefited from the Olympic Winter Games held in Vancouver, such as performing arts and spectator sports, accommodation services, as well as radio and television broadcasting. Retail trade also advanced (+0.6 percent), while wholesale trade (-1.4 percent) and oil and gas extraction (-1.8 percent) declined.

Europe: The euro exhibited remakable resilience during April, particularly given the many travails facing the single unit. For example, Standard&Poors downgraded the credit ratings of Portugal, Greece and Spain in rapid succession. All three countries were also assigned negative outlooks.

Part of the euro’s resilience was due to market expectation the European Central Bank (ECB) and International Monetary Fund would finally cobble together a rescue plan for Greece. That expectation has been realized in the creation of a €110 billion package. Interestingly, the ECB borrowed a page from the Federal Reserve’s playbook and suspended the requirement of a minimum credit-rating theshold for debt instruments issued or guaranteed by the Greek government. I.e., the ECB is willing to take “junk” in exchange for its cash.

Other than the unfolding “Greek tragedy,” the situation in Europe does not appear too dire. A review of selected principal European economic indicators indicates that the 16-nation euro area maintained a February trade surplus of €3.3 billion with the rest of the world; the March unemployment rate was comparable (10 percent) to that in the United States; industrial production was up in February relative to both the previous month and year; and the economic sentiment indicator extended its year-long improvement in April.

Japan: Japan reported a March trade surplus of ¥949 billion (exports rose 43.5 percent in March from the same month a year earlier, while imports rose 20.7 percent). At the same time, the economy has improved to the point the Bank of Japan (BOJ) felt able to terminate its commercial bank stock purchases (an element of its quantitative easing program) – although the BOJ’s interest rate and other special monetary stimulus programs remained unchanged. Nonetheless, the yen depreciated against the dollar in light of a rather pessimistic outlook by the BOJ and realization that falling consumer prices mean more headwinds to come for that economy.

If the U.S. dollar continues its mixed performance, forest products manufacturers can expect to make greater inroads against their Canadian counterparts, but face greater competition in European and Japanese markets.
Posted by DocH at 9:41 PM