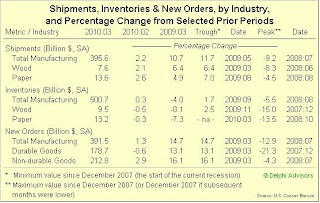 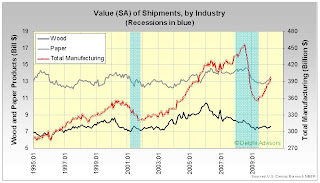 Click on graph for larger image
Shipments, up seven consecutive months, increased $8.6 billion or 2.2 percent to $395.6 billion; this followed a 0.4 percent February increase. Shipments have returned almost to the midpoint between the peak of July 2008 and the trough of May 2009. 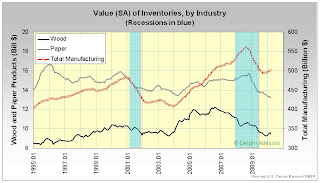 Click on graph for larger image
Inventories, up five of the last six months, increased $1.5 billion or 0.3 percent to $500.7 billion; this followed a 0.7 percent February increase. The inventories-to-shipments ratio was 1.27, down from 1.29 in February.

Wood and paper manufacturers bucked the prevailing trend and reduced their inventories by, respectively, 0.5 and 0.3 percent. Despite the uptick among solid wood manufacturers earlier in the year, the forest products sector appears to be in the midst of a secular trend of declining inventories. 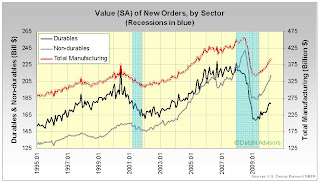 Click on graph for larger image
New orders for manufactured goods in March – up during 11 of the last 12 months – increased $5.0 billion (1.3 percent) to $391.5 billion. This followed a 1.3 percent February increase. Excluding transportation, new orders increased 3.1 percent.