The Bureau of Economic Analysis downgraded its estimate of 1Q2010 U.S. economic output for a second and final time; GDP growth now stands at 2.7 percent, 0.5 percent lower than the initial (advance) estimate. The downward revision was primarily a reflection of a smaller gain in consumer spending and a bigger trade gap.

The economy has now grown for three consecutive quarters after shrinking for four straight during the recession — the longest contraction since World War II. 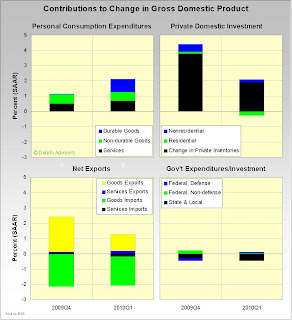 Analysts at Bloomberg.com said “the revised figures showed an economy that was more dependent on inventory restocking and less driven by demand from consumers and businesses before the European debt crisis intensified.” This view was shared by Jay Feldman, an economist at Credit Suisse in New York: "It's a moderate kind of recovery," Feldman said. Consumer spending "is not growing as fast as in prior recoveries."

Despite the comment by Bloomberg’s analysts, consumers boosted their spending by 3 percent, almost double the pace of the previous quarter and the largest increase in three years. Businesses ratcheted up their spending on equipment and software by 11.4 percent.

A growth rate of 2.7 percent would be considered healthy in normal times but it's relatively weak for a recovery after a steep recession. GDP grew at rates of 7 percent to 9 percent for five straight quarters after the last sharp downturn in the early 1980s. Growth of roughly 3 percent is needed just to generate enough jobs to keep up with increasing population; to lower the jobless rate (currently at 9.7 percent) by one percentage point, growth would need to reach 5 percent for a full year.