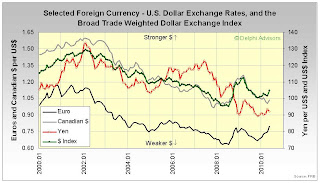 Click graph for larger image
Canada: The loonie weakened even though Canadian GDP expanded in real terms by 6.1 percent (annualized) in 1Q2010, and 7.4 percent just in March. The 1Q2010 growth rate was the fastest in a decade, and March’s increase marked the seventh consecutive monthly advance. Much of the expansion resulted from increased spending on housing and consumer goods and services. Even expectations of an interest rate hike by the Bank of Canada failed to boost the loonie, which was caught in the whirlpool created by concerns over European sovereign debt.

Europe: In weakening for a sixth consecutive month, the euro has fallen to a four-year low against the U.S. dollar. The single currency rallied briefly during the third week of May, when German lawmakers approved their country’s share of a $1 trillion euro-region bailout. But the “euphoria” quickly wore off when the implications of the austerity measures associated with that bailout – coupled with Fitch Ratings’ downgrade of Spain’s credit rating – began to sink into the market’s collective consciousness.

From a statistical standpoint, the 16-nation euro area’s economy shows little in the way of an overall trend. For example, 1Q2010 GDP grew (albeit at a rather tepid 0.8 percent, annualized) along with industrial production. But the unemployment rate continued to inch up in March, and the external trade surplus eroded significantly even though industrial new orders put in a strong showing.

Japan: If there is a poster child for the fickleness of the market, the yen would have to be it. After years of playing the part of “funding currency” for the carry trade that often favored the euro, the yen is now gaining strength as Japan “emerge[s] as a sound investment refuge.” After all, "only the bravest of souls would invest in [euro-denominated] assets these days," Uwe Parpart, chief Asia strategist at Cantor Fitzgerald, said in a recent note to clients. "But there are several large U.S. funds with a non-U.S. mandate that were heavily invested in euro-zone stocks, and they will now be looking east, past Europe," he said. And "Japan should prove the most attractive place to park homeless funds."

In light of Japan’s widening trade and current-account surpluses; solid 1Q2010 GDP growth of 4.9 percent; and rising industrial production; it is perhaps understandable that investors would want to get in on the action.

China: Because China’s renminbi is pegged to the U.S. dollar, the euro’s depreciation against the greenback is making euro area manufacturers more competitive and threatening the already razor-thin profit margins (estimated to be only 2 percent) of their Chinese counterparts. As one analyst put it, the gradual reduction of China’s competitiveness may complicate government attempts to “meet the population’s soaring aspirations.”

The debate rages on as to whether China’s real estate market is or is not in a bubble. Li Daokui, a professor at Tsinghua University and a member of the Chinese central bank’s monetary policy committee, claims “the housing market problem in China is actually much, much more fundamental, much bigger than the housing market problem in the U.S. and U.K." before the financial crisis began. The Boeckh brothers are at the other end of the spectrum with their assertion that “there are no signs of a widespread bubble in asset markets, with the possible exception of inventory stockpiling of some commodities.”
Posted by DocH at 2:36 PM