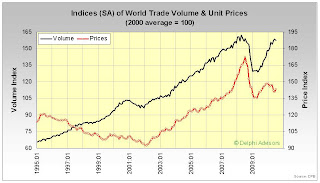 Click image for larger view
According to data compiled by the Netherlands Bureau for Economic Policy Analysis, world trade volume decreased by 0.8 percent in July from the previous month, following a marginally upwardly revised increase of 0.8 percent in June.

Around the world, import volumes were either flat (e.g., emerging Asia) or declining (everywhere else, most notably in the United States). Export volumes in most emerging economies declined substantially. Exports from the developed economies were mixed: the United States and Japan registered strong increases, but exports from the Euro Area decreased. Remarkably, trade volumes in July were within 3 percent of the peak set in April 2008.

Trade volumes and prices have been following divergent trends since early 2010, however. Although prices rose 1.7 percent in July, they remain nearly 17 percent below the July 2008 peak and 3.5 percent below the level in January 2010. 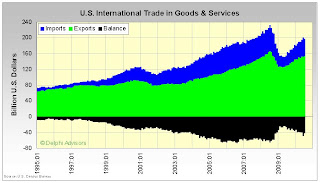 Click image for larger view
Turning to the United States, the U.S. trade deficit narrowed somewhat in July after widening sharply in June to the highest level in 20 months. Total July exports of $153.3 billion and imports of $196.1 billion resulted in a goods and services deficit of $42.8 billion, down from $49.8 billion in June, revised. July exports were $2.8 billion more than June exports of $150.6 billion, and July imports were $4.2 billion less than June imports of $200.3 billion. 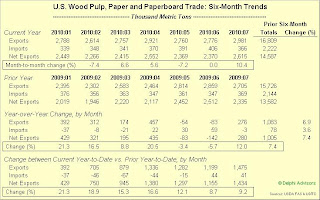 Click image for larger view
U.S. exports of wood pulp, paper and paperboard flirted with the 3 million ton mark in July, while imports eased slightly. Exports are up 10 percent over year-earlier levels, while imports are essentially unchanged. 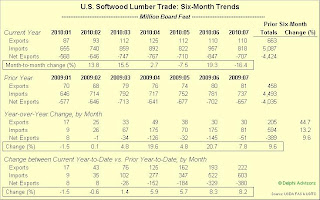 Click image for larger view
Softwood lumber exports were flat in July, but imports fell by more than 14 percent. Exports are nearly 36 percent higher than in July 2009 while imports have risen by only 11 percent. 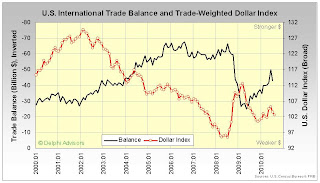 Click image for larger view
With the U.S. dollar weakening in August against a basket of other currencies, we would not be surprised to see the August trade gap tick higher. A weaker dollar makes U.S.-made products relatively more attractive in both the domestic and export markets, but it often worsens the trade deficit because more dollars are required to buy the equivalent volume of imports. Conversely, a stronger dollar stunts demand for domestic products, but improves the overall trade deficit.
Posted by DocH at 1:30 PM