The Institute for Supply Management’s (ISM) reports on the manufacturing and service sectors provide a more up-to-date view of conditions than either the Federal Reserve Board’s report on industrial production and capacity utilization or the U.S. Census Bureau’s report on manufacturers’ shipments, inventories and orders. 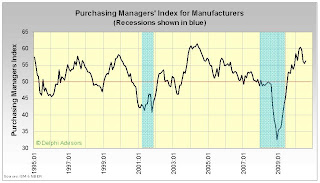 Click image for larger version
With a 0.8 percentage point increase in its PMI, manufacturing expanded at a slightly faster pace in August. "Manufacturing activity continued at a very positive rate in August as the PMI rose slightly when compared to July,” said Norbert Ore, chair of ISM’s Manufacturing Business Survey Committee. “In terms of month-over-month improvement, the Production and Employment Indexes experienced the greatest gains, while new orders continued to grow but at a slightly slower rate. August represents the 13th consecutive month of growth in U.S. manufacturing."

Paper manufacturing lengthened its string of positive changes in August, but all characteristics of Wood Products performance remained unchanged for a second month. 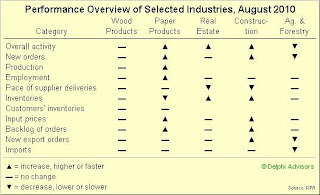 Click image for larger version
Growth in the service sector slowed to a crawl in August; the non-manufacturing index fell 2.8 percentage points (to 51.5 percent). Construction and Real Estate were among the top three industries reporting expansion; Agriculture, Forestry, Fishing & Hunting led the list of contracting industries. The employment index dropped to 48.2, which means service industries shed employees in August. "Companies are really holding back," Anthony Nieves, chair of the ISM services survey. "They've had this wait-and-see attitude for quite some time."

Survey respondent comments ranged from "Continuing to show signs of positive growth" in Construction to "Business is pretty stagnant; starting to see price erosion in our selling markets" in Ag & Forestry.

The services figure is "certainly not a disaster, but a reminder that we're in a fragile environment," said Paul Ashworth, senior U.S. economist at Capital Economics Ltd. in Toronto. "The recovery is just not strong enough. It's still being driven by manufacturing, with the rest of the economy lagging a bit behind."

Input prices rose at a moderate pace for manufacturing industries and jumped significantly for the service sector. Relevant commodities whose prices increased in August include: caustic soda, coated groundwood (also listed in short supply), diesel fuel and gasoline. No relevant cmmodities were down in price.
Posted by DocH at 3:05 PM