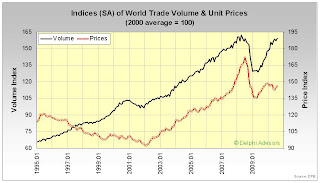 Click image for larger view
According to data compiled by the Netherlands Bureau for Economic Policy Analysis, world trade volumes in August rose by 1.5 percent from the previous month, following a downwardly revised decrease of 1.0 percent in July. The rise in imports was broad based, while on the export side emerging economies outperformed advanced economies; the Euro Area was the only major advanced-economy block to achieve positive export growth. Japanese import and export volume declined substantially. The volume of world trade has returned to within 2 percent of previous peak reached in April 2008.

Prices also rose by just under 1 percent in August, remaining slightly below the peak of last January and more than 15 percent off the peak of July 2008. Prices seem to have lost a strong sense of direction since early 2010, wandering rather aimlessly instead in a gradual downward trend. 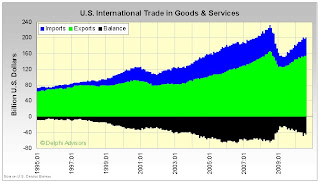 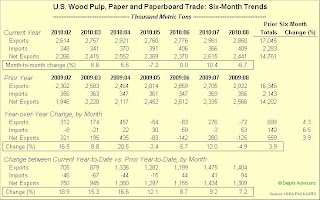 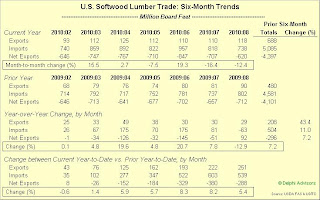 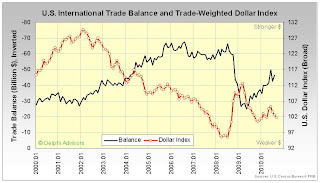 Click image for larger view
With the U.S. dollar weakening in September against a basket of other currencies, we would not be surprised to see the September trade gap tick higher. A weaker dollar makes U.S.-made products relatively more attractive in both the domestic and export markets, but it often worsens the trade deficit because more dollars are required to buy the equivalent volume of imports. Conversely, a stronger dollar stunts demand for domestic products, but improves the overall trade deficit.
Posted by DocH at 2:12 PM