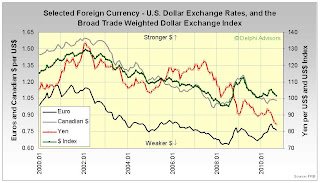 Click image for larger view
Canada: The loonie edged toward parity with its southern cousin despite revelations of a fall-off (-0.1 percent) in Canadian gross domestic product (GDP) during July -- the first monthly decline since August 2009. Manufacturing, retail and wholesale trade, construction and forestry all posted decreases. Increases were recorded in the mining sector and, to a lesser extent, in some financial industries and the public sector.

Europe: The euro strengthened against the dollar as expectations that the U.S. Federal Reserve will engage in quantitative easing overshadowed concerns about conditions in Europe. "Investors have turned bearish on the greenback as speculation mounts that the Fed will increase the monetary base to stimulate the U.S.'s lackluster economic recovery," wrote Brian Dolan, chief currency strategist at Forex.com. "We're left with an environment [in which] bad U.S. news is met by further dollar-selling as the likelihood of additional Fed easing increases, and good U.S. news is similarly met by dollar-selling as risk assets are bought."

The euro gained momentum in early September when European Central Bank chiefs began “jawboning” their way toward an exit from emergency lending measures (as opposed to taking concrete actions), and maintained that inertia despite new problems in Ireland’s banking system, warnings of “contagious effects” on Europe’s banks from sovereign debt risks, and slowing growth of Eurozone economic activity.

“Global growth appears to be slowing and domestic demand is likely to be limited in a number of euro-zone countries by tighter fiscal policy,” said Howard Archer, an economist at IHS Global Insight in London. Contractions in Spain and Ireland “highlight the divergent performance of the euro zone.”

Japan: Unilateral intervention in the currency markets by Japanese officials tempered, but did not reverse, the yen’s rise against the greenback. On a monthly average basis, the yen has been stronger only once before in the past 40 years -- in April 1995. Even Japan’s shrinking trade surplus and industrial production, and expectations of additional quantitative easing by the Bank of Japan were insufficient to significantly pare the yen’s lofty valuation.
Posted by DocH at 11:55 AM