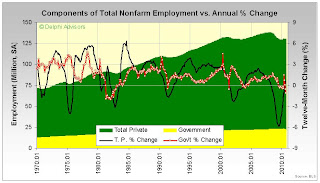 Click image for larger view
The U.S. economy lost 95,000 nonfarm jobs in September as local and state governments shed positions faster than the private sector added them. Despite the net job loss, the official unemployment rate remained steady at 9.6 percent because fewer new workers joined the labor market than in the previous month. 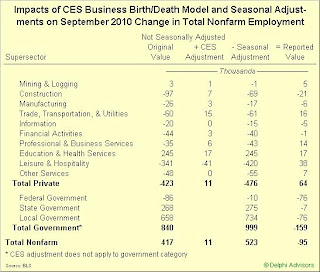 Click image for larger view
Private-sector payrolls rose by 64,000 in September, down from the upwardly revised August estimate of +93,000 (originally +67,000). The government sector lost 159,000 jobs including 77,000 temporary Census workers. State and local governments took the brunt of the public-sector firings (-83,000), while on net, the federal government added 1,000 (presumably permanent) jobs. Although somewhat difficult to see on the graph above, private sector hiring has increased by 0.6 percent on an annual basis while government job rolls have shrunk by 1.1 percent.

The reduction of census employment has distorted the payroll figures for months as the government dismissed workers it no longer needed. For that reason the change in private payrolls is a better gauge of the state of the labor market. Only about 6,000 census workers remain on the job, indicating September may be the last month the jobs data will be distorted. 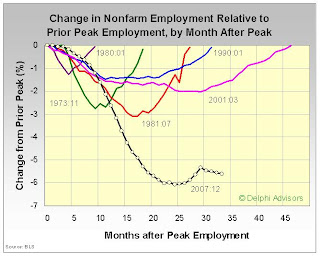 Click image for larger view
As of September, the U.S. economy has lost 7.75 million (5.6 percent) of the jobs that existed at the peak of employment in December 2007.

"The private-sector growth is somewhat heartening but in total you have to expect that state and local and government jobs are going to be a drag for a number of months and perhaps a number of quarters," said Bill Gross, co-chief investment officer at Pacific Investment Management Co. in Newport Beach, California.

The jobless rate has equaled or exceeded 9.5 percent for 14 consecutive months, surpassing the 13-month period from mid-1982 to mid-1983 as the longest span of elevated joblessness since monthly records began in 1948.

"If we're only creating jobs at this pace, the unemployment rate is going to go higher," said Nigel Gault, chief U.S. economist at IHS Global Insight in Lexington, Massachusetts. "We aren't creating enough jobs to keep it steady."

As we have indicated in the past, at least 100,000 jobs need to be created each month just to keep up with population growth. Since nonfarm employment bottomed out last December, job creation has averaged just over 68,000 per month. Thus, the pace of hiring will have to increase dramatically to not only keep up with new workers entering the work force for the first time, but also to once again make those 7.75 million displaced workers productive.
Posted by DocH at 10:47 AM