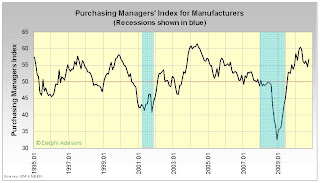 Click image for larger version
With a 2.5 percentage point increase (to 56.9 percent) in its PMI, manufacturing expanded at a faster pace in October, according to the Institute for Supply Management (ISM). "The manufacturing sector grew during October, with both new orders and production making significant gains,” said Norbert Ore, chair of ISM’s Manufacturing Business Survey Committee. “Since hitting a peak in April, the trend for manufacturing has been toward slower growth. However, this month's report signals a continuation of the recovery that began 15 months ago, and its strength raises expectations for growth in the balance of the quarter. Survey respondents note the recovery in autos, computers and exports as key drivers of this growth. Concerns about inventory growth are lessened by the improvement in new orders during October. With 14 of 18 industries reporting growth in October, manufacturing continues to outperform the other sectors of the economy."

Wood Products remained essentially static in October; the only reported change was an uptick in employment. The expansion in Paper Products encompassed production, employment and new export orders. 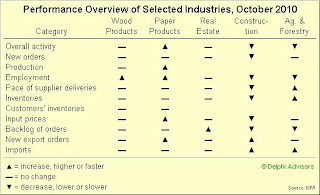 Click image for larger version
The non-manufacturing sector also grew more quickly, thanks to a 1.1 percentage point (to 54.3 percent) increase in the NMI/PMI. None of the specific service industries we track shared in that expansion, however. Like Wood Products, Real Estate was unchanged; Construction and Ag & Forestry both contracted.

Coated groundwood was the only relevant commodity described as in short supply.
Posted by DocH at 12:10 PM