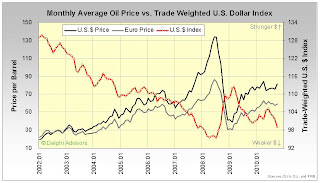 Click image for larger view
The monthly average U.S.-dollar price of West Texas Intermediate crude oil jumped by $6.59 (8.8 percent) in October, to $81.90 per barrel. That price increase coincided with a weaker dollar, a consumption increase of 414,000 barrels per day (BPD) -- to nearly 19.7 million BPD -- during August, but occurred despite persistently high (and rising) crude stocks. 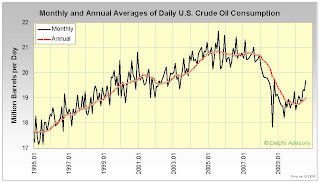 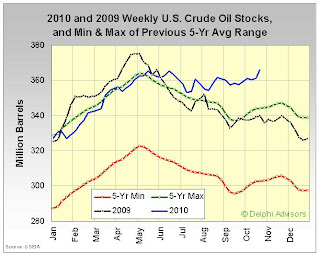 Click image for larger view
The Obama administration, under heavy pressure from the oil industry and Gulf states, on October 12 lifted the deep-water drilling moratorium it imposed in April. The ban had been scheduled to expire on November 30, but Interior Secretary Ken Salazar moved up the deadline, saying new rules have strengthened safety and reduced the risk of another catastrophic blowout. The prohibition likely caused a temporary loss of 8,000 to 12,000 jobs in the Gulf region and drilling is unlikely to resume for at least a few weeks.

Todd Hornbeck, CEO of Covington, La.-based Hornbeck Offshore Services, said lifting the ban would still leave the industry in a "de facto moratorium stage" until the government fully explains how new drilling permits will be issued. "We're still in the dark," said Hornbeck, who heads one of the companies that provides vessels and other services for the offshore industry. "Right now, I'm skeptical that it will be anytime soon that permits will be issued," he said.

Though the administration's policy only addressed deep water operations, "severe bottlenecks in the federal permit review process have resulted in a de facto moratorium for shallow water drilling," Louisiana Governor Bobby Jindal said. Only 12 new permits have been issued for shallow water wells Since early June, compared to the pre- moratorium average of 10 to 14 a month.
Posted by DocH at 8:56 PM