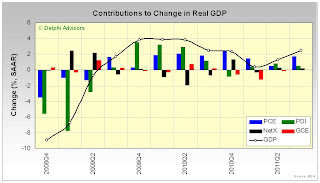 Click image for larger version
The Bureau of Economic Analysis (BEA) estimated 3Q2011 growth in real U.S. gross domestic product (GDP) at a seasonally adjusted and annualized rate of 2.5 percent, up from 1.3 percent in 2Q and the highest reading in a year. Personal consumption expenditures (PCE), private domestic investment (PDI) and net exports (NetX) contributed to 3Q growth in that order, while government consumption expenditures (GCE) were a “wash.” 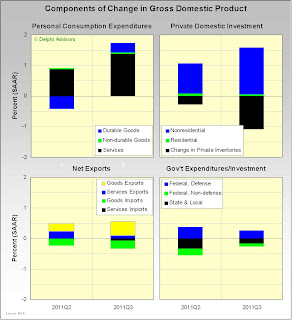 Click image for larger version
We cannot attribute most of the growth to a suspect GDP deflator (the statistic used to remove the effect of price changes from the real GDP estimate), because it is back in line with changes in both the consumer and producer price indices. (We discussed this topic in an earlier “Clearing the Mist” blog post.) 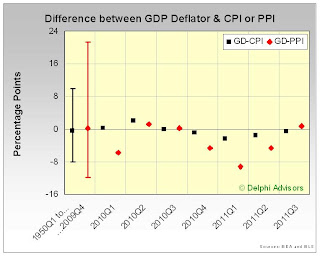 Click image for larger version
Nonetheless, we find the GDP growth estimate -- and particularly the PCE component -- somewhat suspect in light of sour consumer sentiment reported by both Reuters/University of Michigan and The Conference Board. 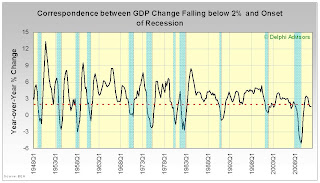 Click image for larger version
Interestingly, the 3Q GDP improvement has not negated the recession “call” made by Federal Reserve analyst Jeremy Nalewaik. Nalewaik’s analysis correlated the onset of recessions with a fall in the year-over-year change in gross domestic product (GDP) below 2 percent. Since 1947, the U.S. economy either was already or soon would be in recession each time the year-over-year change in GDP fell below 2 percent (the red dashed line in the figure above). The year-over-year GDP change was essentially unchanged at 1.6 percent in 3Q.
Posted by DocH at 2:44 PM