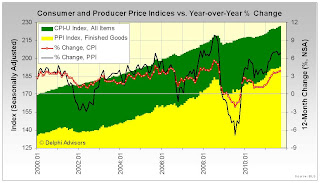 Increases in energy and food indexes were the main cause of the seasonally adjusted all items increase. The gasoline index continued to rise, and indexes for electricity and natural gas increased as well. Broad increases in food indexes also continued in September, with the food at home index rising 0.6 percent for the third month in a row and no major grocery store food group indexes declining.

The seasonally adjusted Producer Price Index for Finished Goods (PPI) rose 0.8 percent in September. Finished goods prices were unchanged in August and increased 0.2 percent in July. At the earlier stages of processing, prices received by manufacturers of intermediate goods moved up 0.6 percent in September, and the crude goods index advanced 2.8 percent. On an unadjusted basis, prices for finished goods climbed 6.9 percent for the 12 months ended September 2011. 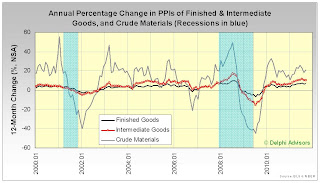 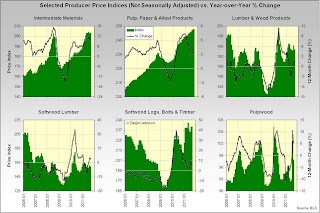 Click image for larger version
The price indexes for the forest products that we track either rose very little or declined; also, with only a couple of exceptions, the pace of increases slowed on a year-over-year basis. 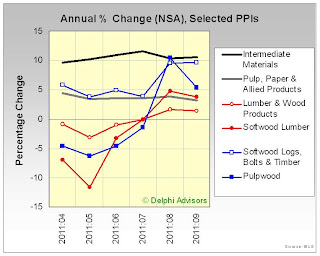 Click image for larger version
Posted by DocH at 11:56 PM