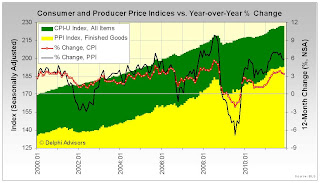 Click image for larger version
The seasonally adjusted Consumer Price Index was unchanged in November. Over the last 12 months, the all items index increased 3.4 percent before seasonal adjustment.

The seasonally adjusted Producer Price Index for Finished Goods (PPI) advanced 0.3 percent in November. Finished goods prices fell 0.3 percent in October and moved up 0.8 percent in September. At the earlier stages of processing, the index for intermediate goods rose 0.2 percent and crude goods prices increased 3.8 percent. On an unadjusted basis, the finished goods index advanced 5.7 percent for the 12 months ended November 2011, the smallest year-over-year rise since a 5.6 percent increase in March 2011. 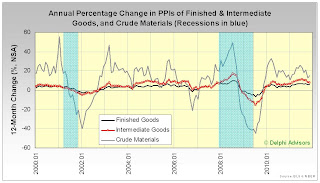 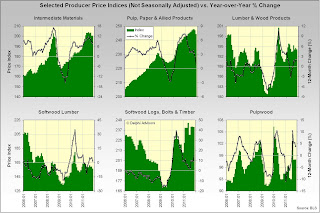 Click image for larger version
Half of the individual price indices we track were unchanged relative to October, while the other half declined. All were higher in November than a year earlier; however, only one (softwood logs, bolts & timber) rose more quickly on a year-over-year basis than in October. 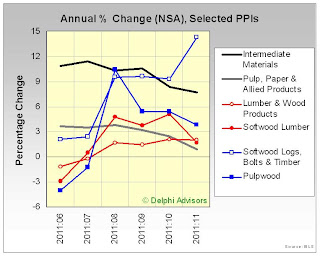 Click image for larger version
Posted by DocH at 8:30 AM