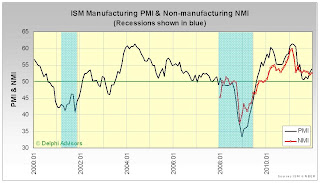 Click image for larger version
The pace of growth in manufacturing picked up again in December, with the Institute for Supply Management’s (ISM) PMI rising to 53.9 percent, from 52.7 in November (50 percent is the breakpoint between contraction and expansion). After reciting some report details, Bradley Holcomb, chair of ISM’s Manufacturing Business Survey Committee, wrapped up his comments by saying, “Manufacturing is finishing out the year on a positive note, with new orders, production and employment all growing in December at faster rates than in November, and with an optimistic view toward the beginning of 2012 as reflected by the panel in this month's survey." 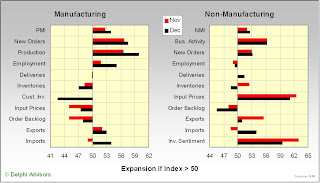 Click image for larger version
The non-manufacturing sector also edged up in December, reflected by a 0.6 percentage point rise (to 52.6 percent) in the non-manufacturing index (now known simply as the “NMI”). "Respondents' comments are mixed and vary by industry and company. Economic growth continues to be slowed by the lag in employment,” concluded Anthony Nieves, chair of ISM’s Non-Manufacturing Business Survey Committee. 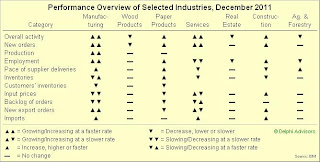 Click image for larger version
The only reported change in Wood Products reflected a slowdown in new orders. Paper Products expanded, the main foreward-looking “negatives” being declines in new export orders and a rise in inventories. Real Estate and Ag & Forestry both reported contraction in overall activity, while Construction expanded.

As the bar chart and table above indicate, input price behavior was mixed during December: prices fell more slowly for manufacturing but rose more slowly for the service sector.

Some respondents reported paying more for fuel while others paid less. The only relevant commodity described as being in short supply was #2 diesel fuel.
Posted by DocH at 10:53 AM