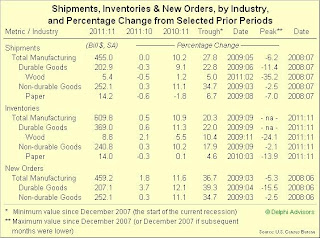 Click image for larger view
According to the U.S. Census Bureau, the value of shipments, inventories and new orders were mostly higher in November for the sectors and industries we track. 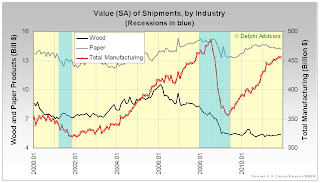 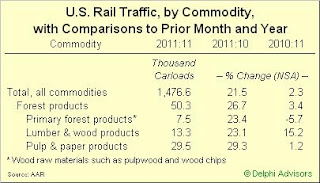 Click image for larger view
Data from the Association of American Railroads (AAR) and the Ceridian-UCLA Pulse of Commerce Index (PCI) help round out the picture on goods shipments. AAR reported a 21.5 percent increase in not-seasonally adjusted rail shipments in November (relative to October), and a 2.3 percent rise from a year earlier. Seasonal adjustments trimmed the 21.5 percent October-to-November increase to a 0.9 percent gain, however. Interestingly, rail shipments of primary forest products were lower in November 2011 than a year earlier.

The PCI, which tracks diesel use for over-the-highway trucking, rose 0.1 percent on a seasonally and workday adjusted basis in November after a 1.1 percent increase in October. Ed Leamer, PCI chief economist said, “The continuing weakness in the PCI is out-of-sync with real retail sales. The year-over-year increase in real retail sales through October was 3.6 percent compared with an increase in the PCI of 1.3 percent. The disconnect between real retail sales and the PCI suggests that retailers have learned to better manage their inventory. Therefore, shoppers can anticipate fewer bargains in the month ahead, and relatively little stock left for the after-Christmas sales.” Leamer added, “With two months of data available, the PCI suggests fourth quarter GDP growth in range of 0.0 to 1.0 percent.” 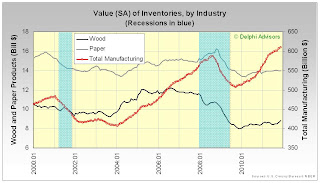 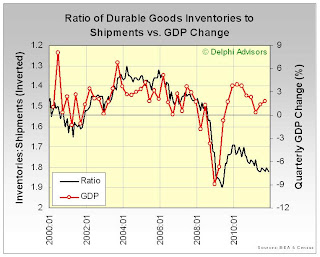 It is somewhat unusual for GDP change to run counter to its historical relationship with the IS ratio for consecutive quarters (2Q and 3Q2011), thus -- unless the relationship between GDP and the IS ratio has truly weakened -- we expect a correction to occur soon: either the IS ratio will fall or GDP growth will decline. Since Census Bureau data show the value of durable goods inventories were at an all-time high in November, shipments “have their work cut out for them.” 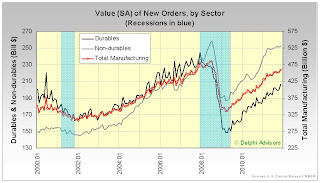