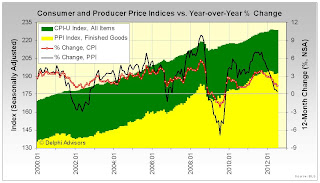 The seasonally adjusted Consumer Price Index was unchanged again in July. Over the last 12 months, the all items index increased 1.4 percent before seasonal adjustment.

Major indexes posted small movements in July, with a 0.3 percent decline in the energy index offsetting 0.1 percent increases in the indexes for food and all items less food and energy. Within energy, declines in the indexes for electricity, natural gas, and fuel oil more than offset a small increase in the gasoline index. Within the food component, the food at home index was unchanged with major grocery store food group indexes mixed, while the food away from home index increased.

The 12-month change in the index for all items was 1.4 percent in July. This compares to 1.7 percent in June and is the smallest 12- month change since November 2010. The index for all items less food and energy rose 2.1 percent for the 12 months ending July, a slight decline from the 2.2 percent figure in June and its smallest increase since October 2011.

The seasonally adjusted Producer Price Index for finished goods (PPI) increased 0.3 percent in July. This advance followed a 0.1 percent increase in June and a 1.0 percent decline in May. At earlier stages of processing, prices received by manufacturers of intermediate goods moved down 0.9 percent in July, and the crude goods index advanced 1.8 percent. On an unadjusted basis, prices for finished goods rose 0.5 percent for the 12 months ended July 2012, continuing the trend of slowing year-over-year increases following a 7.0 percent rise for the 12 months ended September 2011. 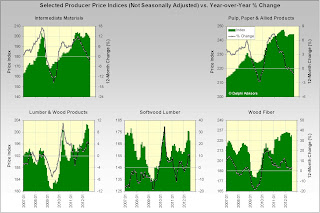 Prices of both intermediate materials and pulp, paper & allied products are lower than they were a year earlier, while the other categories are higher.

Click image for larger version
Posted by DocH at 9:31 AM